The Lehman Trilogy - A complex tale made breathtakingly clear

Told in what can best be described as a continual stream of consciousness, the Broadway play The Lehman Trilogy recounts the rise and fall of what would become a global financial institution. As seen through the eyes of those who made it possible - for better and for worse.

Winningly adapted by Ben Power from Stefano Massini's sprawling novel, the tale begins in 1844 when German immigrant Heyum Lehmann (Simon Russell Beale) steps off the boat in . Heyum, now Henry Lehman thanks to some confusion with a customs officer, makes his way to where he operates a dry goods shop. It's there he's joined by his younger brothers Emanuel (Adrian Lester) and Mayer (Adam Godley).  All different in temperament, the three form a sort of cohesive whole as they find ways to grow their business by learning to adapt to changing times and circumstances. Their can-do attitude and willingness to consider new opportunities enables them to survive economic upheavals caused by the Civil War, the Great Depression and the beginnings of the computer age, among others. 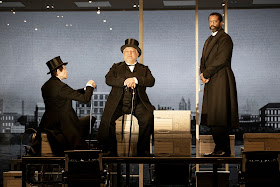 However the stronger and more diversified the entity that will eventually be known as Lehman Brothers becomes, the more tentacles are required to keep its fingers on the pulse of its ever-increasing endeavors.  Dry goods, cotton, computers and railroads being only a few of their involvements.  The ever-increasing need for the company to deliver huge profits and continually be on the cutting edge of the next big thing eventually becoming its undoing.

Examining the idea of capitalism at its most basic, The Lehman Trilogy is a tale of the American Dream and it what can represent. A premise explored through those who first become successful, and then do whatever is necessary to retain everything they have achieved. Also present is the innate desire for one to do better than those who have come before. Something visible not only in the Lehman family, but in the offspring of a Greek diner owner and a Hungarian lamp maker. Each determined to reach as high as they can and find their own personal pot of gold. At the same time, the play also shows the bitter reality that no matter how much one may have earned – either in capital or respect - a new generation will always replace the old. A reality that becomes laced with more than a little irony when those who cast the original Lehman founders aside eventually find themselves in that same situation.

Also evident is an ever-growing cynicism about how one must operate in order to continue to succeed. Especially when the concepts of marketing and public relations are introduced. Along with the premise of getting people to buy what they don't need. This truth is also mixed in with humor when one of the family begins to question concepts others have long accepted as tradition. As well as when one of the Lehman clan comes up with a long check list of items necessary in a potential wife. (Love not being on the list.) 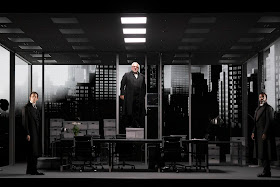 Told with just three principal actors, each playing multiple rules and alternating as the narrator, the performers are not only able to bring to life their various characters, but also the eras in which they inhabit. Beale, who along with Godley came over from the original production, is particularly striking as Henry. The scene when he first sets foot in is particularly emotional. Lester is fine as Emanuel, a man determined to make his own mark and who is more excited by seeing first-hand the results of his efforts rather than a concept someone is describing; but at the same time quick to realize the potential profit in something new. Godley makes a good fit as Emanuel, the quietest of the bothers yet just as smart and determined in his own way.

The actors are helped tremendously by the strong use of Luke Hall's video design. Images which range from the cotton fields of to the concrete canyons of . All of which serve to enhance the story rather than distract from it. Just as important is Nick Powell’s meticulous sound design, offering music which moves faster and faster as the story heads to its final denouncement. Jon Clark’s lighting work also perfectly compliments the production. Sam Medes’ direction is completely on-target, nicely handling a mix of dramatic, comedic and introspective moments. All helped by Es Devlin’s minimalist (and revolving) set. with just enough scenery to do the job.

Taking a complex multi-generational tale and stripping it down to its bare essentials, The Lehman Trilogy is magnificent as it highlights elements of pride, determination and a person's insatiable need be a part of something bigger than themselves. 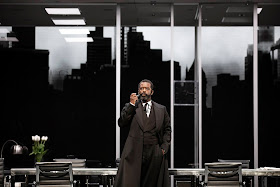