"Apollo 13: The Dark Side of the Moon" - An Enlightening Journey Into Darkness

Reviewed by Judd Hollander
In the closing narration of the classic Twilight Zone television episode "Where is Everybody?" series creator Rod Serling talks about isolation, the barrier of loneliness and the vastness of space. The U.K.-based Original Theatre Company extrapolates on these same elements by tying them to an event which riveted the entire world, with their online production of "Apollo 13: The Dark Side of the Moon".
The film opens in 2020 where former astronauts Jim Lovell (Philip Franks) and Fred Haise (Geoff Aymer) talk with a Researcher (Poppy Roe) about their ill-fated space mission of 50 years earlier. When, approximately 56 hours after launch, an explosion in one of the ship's oxygen tanks forced the cancellation of their journey to the moon and thrust Lovell, Haise (played in 1970 by Christopher Harper and Michael Salami respectively), along with fellow astronaut Jack Swigert (Tom Chambers), into a desperate effort simply to stay alive. For much of the next four days, the men lived in an almost totally frozen and dark spacecraft - it being shut down to save power - as they hurtled through space. Their travels taking them around the dark side of the moon before starting their trajectory home. During the 25 minutes it took their craft to traverse the back of the moon Lovell, Haise and Swigert were cut off from all communications from home as they traveled farther away from Earth than anyone has ever gone, before or since.
One of the film's greatest strengths is its ability to place the audience directly into the story. The use of grainy archival footage in the beginning, such as showing the liftoff of the Apollo 13 spacecraft, helps bring home the enormity of the entire project; and the realization of just how dangerous space travel is - both then and now. The different technical elements of the film are all the more impressive when one learns that, due to the pandemic, much of the action showing the astronauts in space was filmed separately. The actors shooting their own footage, guided by their technical counterparts looking on via various monitoring devices. Co-Directors Alastair Whatley and Charlotte Peters showing a strong understanding of the storyline they are ultimately putting forth.
The most effective parts of the film are its emotional aspects. Lovell showing, more in expression than words, the great disappointment he still feels at never being able to set foot on the surface of the moon. Additionally, there's a clear combination of wistfulness and deeply remembered exultation when describes the Apollo 13 liftoff process, in a rocket "a shade taller than the Statue of Liberty". One can also hear the irony when Lovell and Haise talk about a film they made for broadcast while on the way to the moon. A film no network initially wanted to air because, by 1970, space travel had become pretty much old news. Of course when disaster occurred, then everyone was interested. There was also the feelings of fear and frustration when the three space travelers suddenly find themselves in a situation they could no longer control. All they could do was work to mitigate the accident's effects as best as they could. A similar situation to what's happening now as the world attempts to navigate the ongoing pandemic. 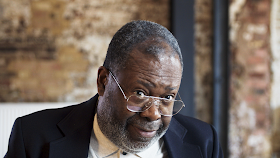 Geoff Aymer as Present Day Fred Haise in "Apollo 13: The Dark Side of the Moon".
The time the astronauts spend on the dark side of the moon constitutes the emotional heart of the film. While the conversation depicted may be fiction - something explained early on - the elements explored are quite real. Much of this is tied into writer Torben Betts' decision to make Haise an African-American. This is not an instance of color-blind casting, but rather a way for the character, by calling attention to his skin color, to ask questions and comment on issues a non-minority could not. At least not with the same level of passion or cultural believability. The back and forth between the astronauts - particularly Haise and Swigert - force the audience to take a long hard look at racial and political events going on at the time, with clear parallels to what is happening in the world today. The 2020 Haise noting how the entire experience made him feel far more connected to the world and how "we're all in this life together". The film also offers a sobering glimpse of reality in its the final moments when Lovell and Haise put on their face masks after they have finished speaking to the Researcher and get ready to leave. 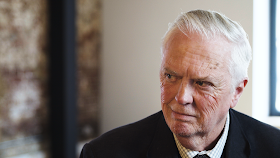 Philip Franks as Present Day Jim Lovell in "Apollo 13: The Dark Side of the Moon".
Franks and Aymer nicely show the gravitas of two old men who have been repeatedly asked the same questions time and time again, yet still manage to keep their answers fresh and non-condescending. Even if there are certain moments of their time in space they still won't talk about publicly. Roe does well as the Researcher, a woman who attempts to guide the conversation along while trying not to sound too far out of her depth. Harper, Salami and Chambers are fine as the 1970 astronauts, while Jenna Augen does a good job of always keeping things professional as the voice of CAPCOM.
Apollo 13: The Dark Side of The Moon