In the late 1840's the colonial government of , in the face of a severe famine and resulting economic crisis, came up with the Orphan Emigration Scheme. Capitalizing on the severe shortage of woman in , the Irish authorities shipped over 4,000 women there with the promise of a better life. These historical events forming the basis of Jaki McCarrick's involving drama Belfast Girls, now at the Irish Repertory Theatre.

The story takes place in 1850 on board the sailing ship Inchinnan, which is transporting approximately 200 women to the land down under. As the ship makes ready to sail, five women find themselves sharing a partitioned space for the journey. Judith (Caroline Strange), originally from Jamaica and the de facto leader of the group; Hannah (Mary Mallen), whose father sold her to a pimp; Ellen (Labhaoise Magee) a refugee from the prison workhouses who likes to draw; Sarah, (Sarah Street) a country girl whose brother has preceded her to Australia; and Molly (Aida Leventaki) who yearns to perform on the stage and is constantly reading books. Over the course of their three-month voyage friendships will be formed, tested and torn apart as these women are forced to confront secrets they've desperately tried to keep hidden.

Belfast Girls is first and foremost, a tale of second chances. Where each of the five has the chance to remake themselves into anything they wish and become "mistress of their own destiny". At least on the journey. Some of the girls using this time to broaden their intellectual horizons. Such as Judith, who secretly yearns to be a teacher, and finds herself infected with Molly's passion for learning. Or Molly, who talks about women’s rights and how things are changing in the world; and also how they now have the chance to be a part of that change.

At the same time the play continually calls forth a feeling of cynicism. One lurking just beneath its hopeful surface. For example, exactly how were some of the women able to secure passage on the ship? Many of the 200 older and far less innocent than what the government advertisements were supposedly seeking. There’s also the ultimate realization that these woman weren't so much escaping , but actually "spat out" by those who used 's need as a chance to empty the workhouses and poorhouses so they could become someone else's problem. The story also takes a swipe at the "rose-colored glasses" effect nostalgia brings forth when the women talk about missing the beauty of . Even though most of them experienced far more suffering, misery and heartbreak there than anything else. 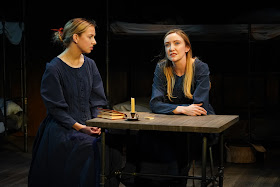 It's also interesting to see how, during the voyage, the women become part of a closed-off world. They dividing themselves into different cliques and gangs, each wary and untrusting of the others. Which is why, even before the play begins, Judith, Hannah and the rest have positioned their luggage to create a barrier in their space to separate themselves from the others. All in an attempt to remain isolated and safe. Yet even among the group of five, class and economic prejudices begin to show as the girls wonder just who exactly is to blame for the miseries that have brought them to this point. Eventually these hatreds come bubbling to the surface, as those seeking someone to blame begin to lash out.

Although some of the women come off as more fully formed than others, each character has an clear individual personality and back story. Any one of which could be the basis for a play of its own. Strange gives Judith a nice world-weary and dangerous quality. Leventaki projects just the right amount of wide-eyed hopeful innocence as Molly. Magee, Street and Mallen show their characters to be well-versed in the practices of denial and forgiveness, though as one comes to find out, their efforts can be misplaced at times.

Also key to the story is director Nicola Murphy's careful pacing, which realistically imparts the impression of a long and claustrophobic voyage. The women suffering through everything from seasickness, sweltering heat to violent storms as they try to get along while not getting on each other’s nerves. Yet through it all, there are some on the boat who never want the journey to end. For once it does, all that will be waiting for them is an uncertain future. The use of traditional Irish songs also adds a nice touch.

Belfast Girls, the title taken from the place the five ladies embarked on the voyage, tells the story of women who risked everything for the hope life would be better on the other side of the world. By the time the journey is over, one's feel like they've taken the entire voyage with them, and can't help but root for them to find the peace and happiness they've been seeking.

Judd Hollander is a reviewer for the Epoch Times and a member of the Drama Desk and Outer Critics Circle.