The Woman in Black - Where Innocence Meets The Unexplainable

(Originally scheduled to run through April 19th, The Woman in Black, as well as all other live performances at the McKittrick Hotel have been suspended until further notice due to the coronavirus pandemic.  Please check the McKittrick website - noted below - for updates.)

Any good writer knows the true power of a ghost story comes not from what is written down, spoken aloud, or even presented for all to see; but rather from the ominous silences and pregnant pauses that fall in-between. These suggestive moments used to further stimulate the already overactive imaginations of those immersed in the tale. Thus making any coming revelation all the more terrifying. So it is with Susan Hill’s 1983 novel, The Woman in Black. A stage version of which has been running in the for over 30 years. After making a brief off-Broadway appearance in 2001, the play has finally returned to these shores and can now be seen at the McKittrick Hotel.

Englishman Arthur Kipps (David Acton) is a bright young man with an even brighter future. He's an up-and-coming solicitor at a law firm, and has a fiancée he loves dearly. One day he's called into his superior's office and given an assignment which will take him to the remote town of . Once there, he will begin dealing with the estate of the recently diseased Mrs. Drablow, and represent the firm at her funeral.

Initially seeing this as just another responsibility handed off to a junior member of the firm, upon his arrival Kipps is surprised to find himself treated as something of a pariah. The townspeople giving him strange looks and quite unwilling to talk to him once his purpose becomes known. It's as if they're all hiding something, which they absolutely refuse to discuss. Such is the case with Mr. Jerome, the local estate agent. A seemingly innocent question from Kipps at the funeral being enough to send the man into a fit of terror. 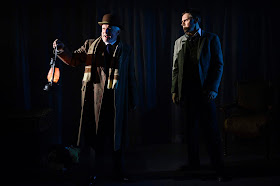 Determined to do the job to which he has been assigned, and with no patience for any apparent local superstitions, Kipps heads out to the Drablow home, an isolated place known as Eel Marsh House. Kipps describing his first sight of the structure as if it was "rising out of the water itself. A tall gaunt house of grey stone with a slate roof.” The entire area surrounded by marshland and accessible only by a long narrow causeway at low tide.

While sorting through the endless papers Mrs. Drablow left behind, Kipps soon begins to feel a strange, ominous presence. A sensation followed soon after by a series of unexplainable noises. Sounds which lead him to a mysterious locked room. Shaking Kipps even further are sudden screams of terror coming from the marshes. It's not long before this once firm believer in the logical and explainable begins to fear for his very sanity, as an oft-repeated horror which stretches back more than a generation begins to unfold about him.

The Woman in Black is told on two parallel tracks. The first reveals a now-aged Kipps trying to tell his story about that long ago experience. One which haunts him to this day. The second is Kipps' tale actually recreated, thanks to an Actor (Ben Porter) who is determined to inject some passion into what Kipps has put down on paper. During this process, The Actor assumes the role of younger Kipps, while Kipps himself takes on the various secondary roles his story calls for. The two men occasionally breaking character to converse with each other as these events play out. 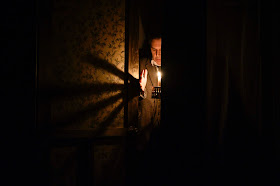 Adapter Stephen Mallatratt wisely mixes the earlier moments of the production with bits of humor, as we see Kipps, the lawyer by trade, having no idea of the difference between simply speaking a story aloud and actually presenting it to an audience. Something The Actor, due to his trade, is quite well-versed in. Mallatratt, director Robin Herford and the rest of the creative team also taking full advantage of the “show, don’t tell” adage when it comes to actually putting forth Kipps’ tale. They jettisoning much of his various descriptions and substituting sound-recordings, lighting effects and some nicely atmospheric props. The methods used to suggest a “pony-trap” (horse and carriage) being particularly amusing.

The story, already foreboding in the beginning, turns much darker in act two as Kipps finds himself increasingly left to his own devices as he stumbles from one horror to the next. His own terror projected out into the audience as they wait for the next shoe to drop. Or the next door to open, or flash of light to illuminate what lurks in the shadows.

The material also offers a stark warning about the danger of obsession. Be it a determination to do one’s job, the love one has for another, or the fear of avoiding a scandal. Holding too tightly onto anything, as the show ultimately points out, has a tremendous potential for tragedy. The story also shows what happens when one is so deeply immersed in their own pain, they lose the ability to forgive. So much so that even those who had nothing to do with the original circumstances are now forced to pay the price. 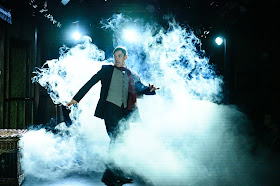 does a wonderful job as Kipps. Purposefully awkward and ill at ease when trying to tell his story aloud, he later comes brilliantly alive when assuming the various different personas in the tale. Porter is excellent as The Actor. He perfectly portraying the younger Kipps with just the right amount of enthusiasm and naiveté during his ill-fated trip, and later breaking down completely when faced with the ultimate truth.

The program bills the show as “a ghost story in a pub”. The Club Car space at the McKittrick nicely set up to project that initially relaxed atmosphere. However, the way the show is staged is not always conducive to the work.

Just as the proper use of silence can be used to heighten tension, too often here it provokes laughter. As evident during a sequence where Kipps is seemingly roaming about the Drablow house in a desperate search. This process taking too long and would have worked far better had Porter been slowly approaching something on stage, rather than walking between the rows of tables where the audience is sitting.

The show would have also been better served without an intermission. Breaking the work into two sections only serves to halt the buildup of growing terror, and also somewhat dilutes the overall effect. The use of ’s direction clearly off at points, with a definite need for things to be played much more sharply. This is especially true in the initial going, where the early banter between The Actor and Kipps could easily have been pared down a bit. Designer Michael Holt’s sets are fine, especially the aforementioned locked room and what is eventually found there. Also completely essential to the show, each in their own way are the excellent lighting effects by Anshuman Bhatia, and the sound design efforts by Sebastian Frost. 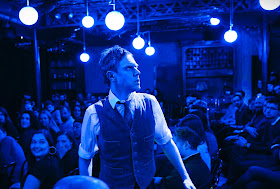 There’s no doubt The Woman In Black is a powerful story. Although there is certainly a lot to experience with the McKittrick production, its actual presentation falls a bit short of the mark.

Susan Hill’s The Woman in Black: A Ghost Story in a Pub