Playwright Lucas Hnath unveils a very personal tale which examines one of humankind's deepest fears. Being held captive by another person while you pray for your very survival. A terror magnified one-hundred fold when freedom looks to be just a few steps away, but being able to cross that threshold seems impossible. Such events, which happened to Hnath's own mother, presented in the documentary theatre piece, Dana H.  Featuring Deidre O’Connell, this work is now at the Vineyard Theatre. 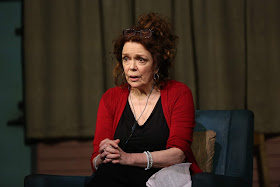 Dana is someone who cares about helping others. A chaplain who works in a  psychiatric ward, she listens to the patients while trying to help them deal with their various issues. Patients such as Jim. A tattooed ex-convict and member of the Aryan Brotherhood, he has a history of mental issues and drug abuse. Someone who can cry like a child one minute and lash out violently the next. Jim establishing a strong emotional connection to Dana during their time together. He eventually becoming so attached to her that, after a suicide attempt, he insisted that unless she came to talk to him, he would not obey the treatment center's protocols.

Jim's firm belief of how much he needs Dana finally spins out of control when, one day in 1997, he breaks into her home and kidnaps her. During the next five months, he physically abuses and psychologically terrorizes her while they travel from place to place, staying in various hotels in the Florida/North Carolina area. Her son, who was away at college during this period, didn’t learn the full story and its subsequent ramifications until years later. Hnath using the audio tapes from a series of interviews his mom gave to Steve Cosson in 2015 to recreate Dana’s experience for the audience. O’Connell telling this story to an unseen interviewer in a non-descript hotel room, while lip synching to Dana's own words.

Told by someone still trying to fully come to terms with what happened, Dana’s tale is the stuff of nightmares. Especially terrifying is the fact that, due to Jim’s apparent standing in the criminal community and his relationship with the local authorities, almost no one is willing to help her. Any members of law enforcement they happen to come across either recognize Jim straight off and turn a blind eye, or can do little more than buy Dana some time so she can flee. Dana’s time with Jim not a consecutive five-month period, as she was able to escape at least twice. Only to have Jim track her down and force her to come with him again. 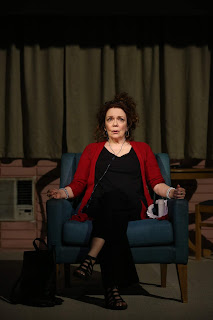 Particularly affecting is Dana’s description of Jim. A charismatic figure with a hair-trigger temper, he continually repeats to Dana how she must always stay with him as only he can protect her. Jim’s involving her in his criminal activities - at one point he sends her to buy guns for him - as well as his continued paranoia about people watching his movements, exacerbates Dana’s own fear about who can she trust to help her. At the same time, a sort of paralysis begins to settle around her where the prospect of escape battles with that of survival. Indeed, one gets the clear feeling Dana hasn’t quite gotten over the thought there might be those from Jim's world that are still watching her.

The work itself is broken down into three separate sections. The early minutes filled with a sense of foreboding as, thanks to information contained in the show program, what is about to happen is clearly explained. Watching those first recollections, one can't help but wonder what Dana might have done to make later events turn out differently. Or what we would have done, were we in that situation.

It’s initially a bit jarring to have all the dialogue presented via lip synch, but O’Connell is so able to immerse herself into the character, you quickly forget she is not the one doing the actual speaking. Steve Cuiffo, billed in the program as an Illusion & Lip Sync Consultant, doing a fantastic job in that aspect. He and director Les Waters working with O’Connell to make sure her every movement, gesture and facial expression perfectly fits with the dialogue. Thus allowing an extra dimension to Dana's words. In effect, both it is Dana and O'Connell who are telling this tale. 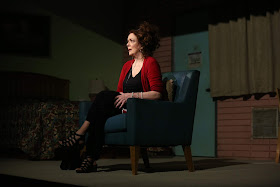 There are a few technical problems present. Such as the continual beeps heard during the sound recordings. They either meant as cues for O’Connell or to indicate a different point in time during Dana's actual interviews. Necessary as they may be, they quickly start to become distracting. Also, there are two occasions when Dana describes certain objects, such as a photograph of a crime scene where there’s a huge amount of congealed blood, and a piece of silverware with Nazi markings. However the objects in question are so small that when O'Connell displays them, they are impossible to see unless one is seated almost directly in front of her. Either using a projection screen to make these items clearer, or simply not showing them at all, and just going with Dana’s descriptions, which are all quite detailed, would have worked far better.

Andrew Boyce's set of the hotel room, with its pink walls, drab bedspread, twin lamps and ceiling fan, perfectly calls to mind the thousands of such rooms across the country. Waters directs the entire piece with a sure hand. He not having to worry about ratcheting up the tension as it were, but simply allow Dana’s story to play out in her own words.

Dana H tells one woman’s harrowing tale of terror, survival and the beginnings of recovery. It’s a story both powerfully and painfully told.

Adapted from interviews from Dana Higginbotham conducted by Steve Cosson