Just because you can do something doesn't mean you should. Such is the message of the new musical Bob and Carol and Ted and Alice. Presented by The New Group at The Pershing Square Signature Center, this earnest take on the 1969 film of the same name has much to say about four thirtysomethings who try to become part of something which they have no real understanding of. Sadly, the show ultimately fails in its execution.

Documentary filmmaker Bob (Joél Pérez), lawyer Ted (Michael Zegen) and their stay-at-home wives Carol (Jennifer Damiano) and Alice (Ana Nogueira) are the best of friends. Bob and Carol being the freer thinkers of this foursome, while Ted and Alice are more conservative. Bob and Carol for example, would think nothing of suddenly singing at a crowded restaurant. Something which Ted and Alice would never do.

One thing both couples have in common is their complete love for their respective spouses, and total commitment to them. Things change when Bob and Carol go on a spiritual retreat to “get in touch with their feelings” as it were. Bob also interested in seeing if there’s enough material there for a new project. However, by the end of their stay, the two find themselves completely immersed in the sessions they've participated in. Ones which allow them to give voice to inner emotions and personal regrets they never realized they had. Or at least ever admitted, even to themselves. This newfound awareness beginning to cause cracks in their marriage. 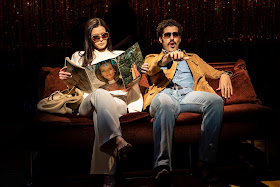 Soon after, Bob, who at the age of 35 finds himself in a midlife crisis, travels to in order to shoot some footage for his latest documentary, and winds up sleeping with a 24-year old (Suzanne Vega). His feelings in the wake of his indiscretion, as well as Carol’s reaction when she learns the truth, threaten not only their own relationship, but Ted’s and ’s as well. Bob and Carol having decided to freely share this information with them without any advance warning.

A work filled with contractions, Bob and Carol and Ted and Alice takes a swipe at the sexual mores of the time as it shows four people all seemingly prepared to talk the talk when it comes to free love and lack of inhibition, but not quite ready to actually practice what they preach. Bob’s initial reaction when it comes to finding out Carol has had sex with someone else – she doesn’t call it an “affair” or “cheating” - is quite different from the understanding by him which Carol feels is called for. Understanding she previously showed him when the situation was reversed. 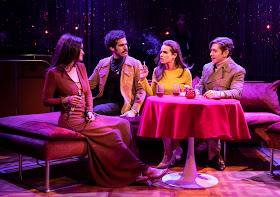 Book writer Jonathan Marc Sherman certainly has a lot to work with here. Unfortunately, the different characters come off as so vapid and one-dimensional, one is hard pressed find a reason to care about them. The only one of the four who really gets a chance to break out is Ted when he sings a solo number about his own marital issues. Ted seeing Bob and Carol’s relationship changing while feeling ever more suffocated in his own.

Ted’s solution in his regard, and the reactions by the others to it during a trip to , lead to an pivotal and quite effective moment of understanding between the four. Band Leader Vega hitting the proverbial nail squarely on the head when she sings "that maybe there is a limit to desire".

However the very strong final 20 minutes of the show cannot compensate for all the squandered efforts that have come before. Especially when the individual sequences often feel completely disconnected with one another - as if they don't quite belong in the same play. Such as a quick scene with talking to her therapist (Vega) or Ted chatting with an attractive woman on an airplane. Director Scott Elliott not really able to being any of these moments together into a cohesive whole. 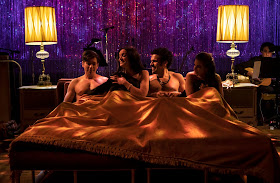 One must be also very careful when setting a show in a specific era. Especially one available to the audience either through their own memories or television shows and movies from the time depicted. A connection Bob and Carol and Ted and Alice is unable to establish. Neither the costumes, hairstyles, or the various commercials - the latter spoken either by the cast or members of the onstage orchestra – really evoke memories of the time in question, much less any strong feeling of nostalgia.

The score by Duncan Sheik (music, lyrics) and Amanda Green (lyrics) also doesn’t work as well as it should. The different numbers, at times more snippets of songs rather than full pieces, feel either awkward dialogue-wise, or repetitive when it comes to the music. The few exceptions to this being noted above. Though it must be said the onstage musicians all to a great job. Likewise, the actors all warble their respective tunes nicely, and even get to show off their own musical talents on the instruments. Good work by Kelly Devine in regards to the musical staging.

While Bob and Carol and Ted and Alice quite profoundly depicts the foibles that come with being human, the show ends up lacking the crucial spark to make the audience truly care about what unfolds on stage.

Bob and Carol and Ted and Alice