Watching Douglas Sills sing “Movies Were Movies”, the opening number in the recent Encores! production of the 1974 Broadway musical Mack & Mabel, one can understand just how wonderful this work has the potential to be. Sadly, the show falters almost immediately as Jerry Herman's powerful score is undone by a number of issues. Including the problematic book by Michael Stewart. While's Stewart's efforts have since been revised by Francine Pascal, the end result is still too unfocused to allow this fictional look at the romance between director Mack Sennett (Sills) and actress Mabel Normand (Alexandra Socha) to really take off. Though thanks to the boundless energy of the cast, it's certainly not for lack of trying.

After setting things up via a sequence in 1938, the story jumps back 26 years to the title characters' first meeting at the Sennett film studios in . Normand inadvertently ruining a climatic scene of the director's latest silent comedy short when she walks through a door at the wrong moment. Seeing something special in Normand, and her reactions to the chaos she causes with her entrance, Sennett offers her a part in his next film. Mabel, after some initial hesitation, soon finds herself bitten by the acting bug and accepts. She quickly becoming the latest and most important star in the Sennett comedy stable. 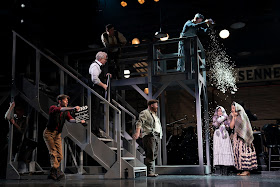 Mabel's subsequent success enables the director to attract enough financing to transplant his entire base of operations to . The state quickly becoming a for the burgeoning film industry. Mabel and Mack also beginning a personal relationship during this time. Even though, as the rather volatile Sennett is quick to point out, he is definitely not the romantic type.

What eventually causes a break between Normand and Sennett is Mack's desire to control Mabel creatively. He refusing to loan her out to other studios and directors, such as William Desmond Taylor (Michael Berresse) who sees a bigger future for Mabel than starring in an endless string of comedy shorts. Something Mabel only finds out about by accident. Sennett meanwhile remains completely resolute in his certainty that he always knows what's best when it comes to making movies.

Mack & Mabel is a musical one wants desperately to enjoy, but there is no getting around the inherent problems of its structure. A main one being that the character of Sennett is a complete bastard. He endlessly putting his actors and staff through their paces, concerned only about getting the next take completed and the next film in the can. It's hard to root for a character who's so unlikable, even when we are given a reason for his being the way he is. The relentless pressure of working for Sennett also taking a toll on Mabel, who begins using pills to help her get through the day. A dependency that only increases as time goes on. Sennett, who also serves as the show's narrator as he looks back on events from years later, finally admitting how he simply didn't want to know about Mabel's problem. 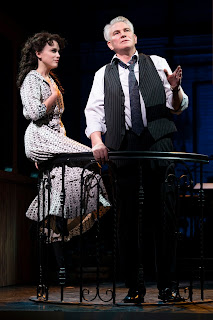 While we do get the chance to understand Sennett, the show doesn't offer nearly the same incite on Mabel. Clearly funny, outgoing and initially star-struck, her ever-increasing booze and drug problem, as well as her involvement in a full-on scandal, all feel almost a tacked-on afterthought. None of this really explored until the final section of the show and by then, it's too late to effectively work it into the story.

While the show is also meant to be a homage to the silent film era, there are too many sequences filled with deliberate, over-the-top acting which all too quickly start to become annoying. In the same vein, a succession of big production numbers also starts to feel rather repetitious, though the songs themselves are certainly nice to hear.  The problem being not only the show's internal structure, but also the direction of Josh Rhodes, who continuously fails to sharpen the various scenes in order to make them more interesting. The result being that too much of the show is played at the same level. An issue that becomes increasingly more apparent whenever things start to veer into more dramatic territory.

Sills does a great job as Sennett. He playing the character as a driven, bull-headed sort who is unable to accept his own failings, or his share of the blame for anything. His one constant underlying drive, the desire to be able to make people laugh. A need he brings beautifully home in the haunting "I Wanna Make the World Laugh". 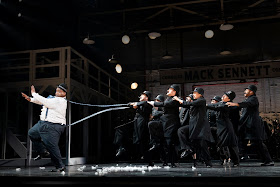 Socha is perfect as Normand. A woman filled with the desire to succeed in whatever she sets out to do. Whether it's collecting 15 cents for the sandwich she delivered to Sennett's studio, becoming a top film star, or making Sennett fall in love with her. Her best numbers being the infectious "Look What Happened to Mabel" and the determined "Wherever He Ain't." The rest of the cast do a great job, but other than Sennett and Normand, none of the characters really break out from the pack. Though Lilli Cooper and Major Attaway come closest as respectively, Lottie Ames and Fatty Arbuckle.

The Jerry Herman score, as performed by the Encores! Orchestra, works beautifully. In addition to those songs mentioned above, highlights include the touching "I Won't Send Roses"; the wistful "Time Heals Everything", and the joyful "When Mabel Comes in the Room".

Scenic designer Allen Moyer does a wonderful job in recreating the world of silent pictures. The various costumes by Amy Clark and the sound design by Kai Harada - the latter's efforts quite pivotal here - also work very well.

Volumes have been written about the problems with Mack & Mabel. This latest effort by Encores! is admirable indeed, but ultimately, it can't hide the flaws in the basic makeup of the show.