Tech Support - When Life Is What You Make It

Who among us hasn't at one point longed for a break from hi-speed technology and a return to a time when things were simpler? This is the starting point for Debra Whitfield's time-traveling romantic comedy Tech Support, presented by Chatillion Stage Company at 59E59 Theaters.

In , in the year 2020, 40 year-old Pamela Stark (Margot White) is having a meltdown. Her printer is jammed, her coffee maker won't work, and her husband recently broke up with her on Instgram Live. There are also over 200 people in the phone queue ahead of her waiting to speak to a computer technician. A rare book dealer by trade, Pamela increasingly feels like "an analog girl trapped in a digital world" and yearns for the days where everything isn't measured by information bytes, and "trolls were just dolls with funny hair".

Finally getting through to a tech support guy named Chip (Ryan Avalos), and pouring her heart out to him, Pamela is suddenly offered a choice not only for a different technical department, but also a different time period. She then finds herself in 1919, the first of many time jumps she will experience, interacting with those around her as she attempts to find her way home. Though with each successive shift, Pamela must also face the consequences of what her visits to earlier eras had set in motion. 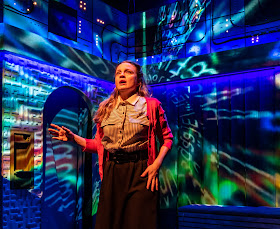 Containing echoes of Eric Overmyer's 1985 stage work On The Verge, and the classic Twilight Zone episode A Stop at Willoughby, Whitfield's script stresses the danger of taking life for granted. This shown via the various women's issues - such as abortion and birth control - explored in the play; and how the rights and choices people in the present have long since grown to expect, may not always be there in the future. Each of the time periods Pamela visits being on the cusp of societal change in regards to traditional women's roles.

Probably the most important decision by Whitfield was to show Pamela as one of those everyday people just trying to get through life. Thus making her far more relatable to the audience than say, a scientist working on a major breakthrough. White does an excellent job in the role; the character growing more confident in herself as the play progresses. This change gradually leading Pamela to realize the importance of living in the here and now - whenever that here and now happens to be. It's a truth the rest of the characters already understand and one Pamela must learn before she can get to her final destination.

Another important aspect of the play is the enjoyable mixture of humor and drama throughout. A nice continuing element, one which ties in to the growing adaptability of Pamela's character, is her ever-quickening ability to recover whenever she accidentally drops in a 21st century saying in the wrong era. There's also an enjoyable running gag of why Coca-Cola seemed to have had more of a kick to it in 1919 than in later times Pamela visits. 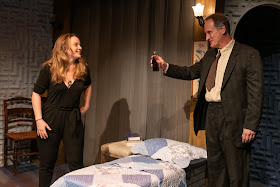 It also helps that many of the people Pamela meets are well-rounded enough to make them seem quite real. Particularly interesting is Charlie (Mark Lotito), a widowed World War I veteran and someone who, in his own way, has just as many problems with technology in 1919 as Pamela did in 2020. Lauriel Friedman does very well as Grace, a character whose changes through the decades provides a perfect example of how opportunities for women have changed over the years. Avalos does quite well as various people Pamela encounters in her journey - all of whom have the same name. Leanne Cabrera nicely rounds out the cast in the two roles she takes on.

The various technical elements of the play come together well; particularly in regards to the different temporal shifts. Deborah Constantine's lighting and Ed Matthew's sound design being key here. As are the projection design by Elliott Forrest. Natalie Taylor Heart's sets nicely makes full use of the relatively small playing area.

The once place the script unfortunately does go off the rails is during a brief sojourn to 1978. Too many of the characters in this sequence being presented as stereotypical caricatures; which ends up cheapening much of the entire scene - one which is only there to present a single plot point in the first place. Whitfield, who also handles the directing chores, being unable to make the characters gel here in a way she did with ease in the other segments.

There are a few other elements in the script that don't work as well as they should. A riff on the classic "walk this way" routine falls flat, and a reference to the dancing team of and Irene Castle doesn't fit chronologically the way it's delivered. On the whole however, Tech Support is an entertaining tale of one woman's attempt to find her place in the universe, and who winds up finding herself in the process.