Love and passion collide with loyalty and responsibility in Moulin Rouge! A stirring powerhouse of a Broadway musical at the Al Hirschfeld Theatre.

It's 1899 and the fabled Moulin Rouge nightclub in – where one’s darkest fantasies can become reality – is on the edge of bankruptcy. Owner Harold Zidler's (Danny Burstein) only chance to save the club is to convince the Duke of Monroth (Tam Mutu), a frequent visitor, to become its financial patron. The Duke however, is more interested in Satine (Karen Olivo), the Moulin Rouge's beautiful and seductive star. As such, it has been arranged for Satine to meet and seduce the Duke; thus making him more pliable to any financial requests.

Yet on the very night this is to happen, Satine, in the grand tradition of mistaken identities and convenient coincidences - unexpectedly encounters Christian (Aaron Tveit). A singer/songwriter from , Christian has come to to be an artist, and has arrived at The Moulin Rouge at the urging of his friends Toulouse-Lautrec (Sahr Ngaujah) and (Ricky Rojas) to sing one of his songs to Satine. The three hoping she will be impressed enough to induce Harold to put on the show they have been working on.

With Satine and Christine each having their own agenda, neither expects the immediate connection that occurs when they first lock eyes. Christian quickly falling deeply in love with this beautiful vision; while Satine, who has long since let her heart grow cold after a lifetime of hardship, is surprised to find herself genuinely attracted to this young man. 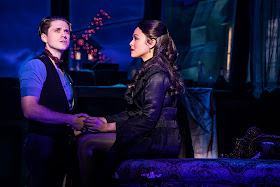 Aaron Tveit as Christian and Karen Olivo as Satine. Photo by Matthew Murphy

For those who work at The Moulin Rouge, the most important thing is survival. The club may not be perfect, but it is a safe haven from the outside world, and certainly better than trying to survive on the street. This need also translates into a deep-seated loyalty among the dancers, all of whom consider themselves a family. Each willing to do whatever it takes for the others, even at the expense of their own happiness. It's a value system Christian, having never been in such a situation, is unable to understand. It's the same reason Satine, who has agreed to become the Duke's mistress so he will save the club from closing, initially dismisses Christian's belief in love above all as foolish and childlike.

Based on the hit motion picture of the same name, Moulin Rouge! at times feels like an immersive experience. One which begins the moment you enter the theatre and see the stage decked out in red, with a windmill on one balcony and a blue elephant on another. The story may be set in 1899, but the music, through which most of the story is told, is altogether modern. The songs used ranging from the Beatles and David Bowie to the Talking Heads and Lady Gaga.

Alex Timbers' direction skillfully handles the blending of the various musical elements with John Logan's text. With none of the musical numbers, some of which provoke knowing laughs from the audience, coming off as tired or strained. Matching Timbers beat for beat is Sonya Tayeh's flawless choreography. Particularly enjoyable are the dance numbers at The Moulin Rouge in act one, as well as "Bad Romance". The latter a sequence from the show Toulouse-Lautrec and the others have conceived. 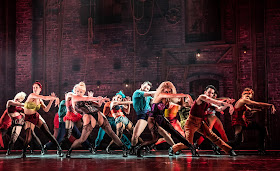 The Company of Moulin Rouge! The Musical   Photo by Matthew Murphy.

While not all of the songs necessarily advance the plot, they all wonderfully help set the mood and feel of the show, and work to make the overall experience a rousing success. It's also nice for a change to be actually able to hear the lyrics in question, instead of the music being so over-amplified, the audience is unable to discern what the actors are singing. (A sadly frequent problem in musicals today.)

Another strong touch is the continual showcasing of color throughout. A can-can dance number being particularly striking in that regard. Said color use also making it rather jarring when we see the muted and lifeless hues worn by those in high society when the Duke attempts to integrate Satine into that part of his life.

Just as important is the mixing of the show's dramatic elements with moments of humor. Such as Christian's first meeting with Toulouse-Lautrec and , where he warbles a tune from "The Sound of Music". Christian and his friends, along with Satine and Harold, also doing a hilarious take on the backers audition process when they are forced to quickly improvise themselves out of an awkward situation with the Duke. There's also an amusing subplot involving , supposedly the "greatest tango dancer in ", and Nini (Robyn Hurder), one of the dancers at The Moulin Rouge.

Olivo perfectly embodies Satine, a strong, cynical woman who has long since learned to use her various talents to her advantage. Her dark demeanor nicely offset by the softer, yet just as striking performance of Tveit as Christian. The two meshing quite well as the star-crossed lovers. Burstein is excellent as Harold. He taking what could easily be a stereotypical villain and turning him into a three-dimensional character; struggling to balance what is necessary with what is right. Ngaujah adds both humor and pathos as Toulouse-Lautrec. Someone who once shared Christian's worldview when he was younger, but unlike Satine, has never forgotten what it is to dream. Muto is convincingly menacing as the Duke. His performance calling to mind a combination urbane gentleman and coiled snake. 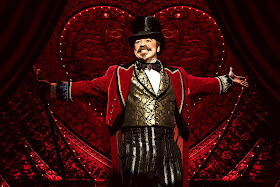 Exploring the idea of love in its many forms, Moulin Rouge! is nothing less than a heart-wrenching journey through both the darkest and brightest parts of the human soul.