When one continually projects a sunny disposition, no matter the circumstances, it’s possible the person in question is trying to hide some deep personal pain. Such is the situation one character faces in the world premiere of Jesse Eisenberg’s ironically named Happy Talk. The play being presented Off-Broadway by The New Group at the .

At first glance, (Susan Sarandon) seems like a happy suburbanite. She is married to Bill (Daniel Oreskes), whom she loves; and is an apparent social pillar of her community. She is also an amateur actress and is currently in rehearsal for a production of Rodgers and Hammerstein’s South Pacific at the local Jewish Community Center. Perhaps the only dark spot in 's existence is her strained relationship with her aged mother. The caring of her mom the responsibility of Ljuba (Marin ), the family’s live-in maid/nurse. Ljuba hails from and happens to be in the illegally. Lorraine being all too aware of Ljuba's situation. When Ljuba mentions her constant worry of being discovered by the authorities, comes up with the idea of marrying her off to Ronny (Nico Santos), one of the actors in the South Pacific company. This despite the fact Ronny is already in a committed relationship, one he has no desire to terminate. However, Ronny and his partner are not in the best financial straits; and when learning he will receive $15,000 for entering into the marriage, said money coming from what Ljuba has saved over the years for this express purpose, he agrees to the plan.

While things quickly begin to feel like a television sitcom - one can almost hear the canned laughter at points – it soon becomes obvious what we are seeing is a case study of someone’s world falling apart. desperately trying to maintain an air of happiness and certainty, even as key elements in her life begin to unravel.

, as one quickly learns, needs to be the total center of attention – of everything. She happily getting involved in Ljuba and Ronny’s lives, clashing with the South Pacific director about her character, and always steering the flow of any conversation so it becomes all about her. She is also able to come up with convincing excuses for any unfavorable situation, so nothing ever becomes her fault. As when she learns the South Pacific cast has never invited her out for drinks after rehearsals.

It also soon becomes apparent that is quite well-versed in the art of denial. She continually putting up a happy front so she does not have to face other, more serious realities. Including certain medical issues concerning those closest to her. Coupled with this is the fear she has of being abandoned and left alone. An issue which further manifests itself when she realizes Ljuba’s upcoming marriage could result in her getting a green card, and thus no longer in need of 's protection. 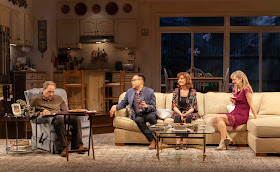 L-R: Daniel Oreskes, Nico Santos, Susan Sarandon and Marin Ireland in Jesse Eisenberg’s “Happy Talk,” a world premiere production from The New Group, directed by Scott Elliott, at The Pershing Square Signature Center. PHOTO CREDIT: Monique Carboni. for more, www.thenewgroup.org
Especially interesting are the events set in motion by and Bill’s daughter, Jenny (Tedra Millan). A confrontational sort, she has totally rejected her mother’s sedate, middle-class world. The irony being that Jenny’s various acts of defiance may prove to be just as hurtful to others as her mom’s behavior has been to her.

Eisenberg has crafted a story with a number of possibilities, but misses several key points which would have made everything come together. Such as a fuller exploration of the relationships between and her various family members. Yet despite this weakness, one still can connect with and what she is feeling. That is, until the final scene where the playwright takes things in a completely new direction. One which makes no sense in relation to what has come before.

There’s nothing wrong with wanting to surprise the audience with a last minute reveal. But after closing the previous scene with a deeply emotional moment - and an indication of where things are going – by changing gears so abruptly, the entire play falls flat. The final scene also giving the impression of being tacked on as an afterthought. In addition, the last sequence is missing several important points when it comes to characterization and plot. Ones which, if worked into the story earlier, might have made the ending make sense.

Sarandon does an excellent job as she takes from annoying to sympathetic to something much darker. Oreskes is quite good as Bill, a character who says volumes with very few words; yet in the end is able to perfectly get any across any point he needs to make. Marin does well as Ljuba, a woman looking to start a new life, although her trust in the wrong person may prove her undoing. Millan is fine in what amounts to an extended cameo as Jenny. Her scenes with showing neither woman really listening to what the other has to say. unfortunately, is saddled with a role which never rises above parody. His scenes designed to be light and cute, rather than anything deeper. Also, his habit of joining in quoting lines and singing bits of song from South Pacific becomes tiresome very quickly.

The direction by Scott Elliott is uneven. His efforts working better in the dramatic moments, but floundering whenever he tries to bring to life any of the comedic situations in the script. Though ironically, his sharpness in staging the ending only serves to call attention to its failure in respect to the overall narrative of the piece. The scenic design by Derek McLane nicely calls to mind the suburban setting that the play imagines.

Ultimately, Happy Talk feels either like a play rushed into production too soon, or one labored on too long with someone on the creative team not knowing when to stop.

Presented by The New Group at The
Tickets: 212-279-4200 or www.TheNewGroup.com
Running time: 80 minutes, no intermissions
Closes: