Pretty much relegated to the dustbin of history, the Broadway musical High Button Shoes is mainly remembered by theatre lovers and historians for its “Bathing Beauty Ballet”. A classic piece of choreography by Jerome Robbins which opens act two. The show itself not seen on Broadway since its initial run 1947, where it notched an impressive string of 747 performances. Sadly, a recent revival by Encores! at showed why this work is unlikely to again grace the stage anytime soon.

Set in 1913, High Button Shoes tells the story of perennial confidence man Harrison Floy (Michael Urie) and his partner/shill, Mr. Pontdue (Kevin Chamberlain). After several close brushes with the law, the two head for ’s boyhood home of . Once there, passes himself off as a salesman extraordinaire, and re-ingratiates himself with the well-to-do Longstreet family - whom he used to work for years earlier. In short order, ensnares the entire town in a real estate scam. His plan being to fleece as many folks as possible before he and Pontdue hop a train out of town. 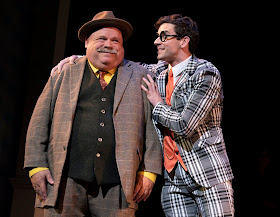 also finds himself part of a love triangle. He supposedly courting the very eligible and beautiful Fran Longstreet (Carla Duren); daughter of Sarah Longstreet (Betsey Wolfe). Fran however, is in love with Hubert Ogglethorpe, a.k.a. Oggle (Marc Koeck), a member of the football team. Though ’s promises of the bright lights of soon threaten to sweep the unsuspecting Fran off her feet. It doesn’t hurt that Sarah is also firmly in ’s corner. The elder Longstreet trusting on just about everything. A loyalty which soon stokes the fires of jealously in Sarah’s husband (Chester Gregory).

At the heart of High Button Shoes are several themes with a clear and simplistic moral tone. Such as a warning not to take advantage of others, even when it would be clearly quite lucrative to do so; and how true love will eventually win out. Yet while there certainly is potential in the material, in the Encores! production, it all pretty much falls flat. Stephen Longstreet’s book feels tired and clunky, with almost no character development, and precious little else to hold one’s interest. John Rando’s directorial efforts are also rather lackluster. Particularly in being unable to inject any element of nostalgia into the proceedings. Something one assumes was a big selling point to 1947 audiences. The sets by Allen Moyer and costumes by Ann Hould-Ward also never really rise above the mediocre.

The biggest problem of all is with the character of . While Urie has previously proven himself quite accomplished in both dramatic and comedic roles, in High Button Shoes, he seems completely out of his depth. He also channels Phil Slivers, as evident in the character's speech and movements. Silvers playing in the 1947 production. Unfortunately, none of Urie's efforts yield any of the roughish charm or caustic wit which might have made his interpretation at least somewhat appealing. His efforts instead coming off as annoying and vapid. Not a good thing when said character is at the center of the story.

Other characterization problems in the show include a complete lack of chemistry between Harrison, Fran and Oggle; as well as no explanation of why Sarah demonstrates a complete trust in from the very beginning. The latter issue running counter to the character's otherwise cautious and level-headed nature.

The music by Jule Styne is pleasant enough but unmemorable, as are the lyrics by Sammy Cahn. Not surprisingly, the highlight of this production are the different numbers which feature the Robbins choreography, as excellently staged here by Sarah O’Gleby.

Quite amusing indeed was the “Bathing Beauty Ballet” - a roughly 10-minute piece done in a frenetic Keystone Cops style. The sequence following Harrison, Pontdue and Fran as they descend on , only to be pursued by the police and some of the people from Longstreet. Though without the audience being given a chance to connect with the various characters, and thus start to care about them, the piece loses much of its charm. Far more effective was the gentle duet “I Still Get Jealous”, where Sara and her husband recall how much they still care for one another after many years of marriage. It must also be said that the Encores! Orchestra, under the very capable hands of music director and conductor Rob Berman, is never anything less than superb.

High Button Shoes may have been a hit once upon a time, but it needs a complete overhaul to make it anything more than a passing interest today. An interest which is forgotten almost as soon as the final curtain comes down.