Gary: A Sequel to Titus Andronicus - A Missed Opportunity

No one involved in the theatre sets out to present a bad play; producers Max Bialystock and Leo Bloom notwithstanding. However sometimes one gets so enamored of what they're trying to say, the message of the show can become lost. Case in point, Taylor Mac’s glorious misfire that is : A Sequel to Titus Andronicus, now running at the Booth Theatre on Broadway.

In ancient , the years of war and bloodshed may finally be over, but the aftereffects are still being felt. The streets littered with the bodies of the dead. In an effort to get things back to normal as quickly as possible, hundreds of corpses have been moved out of public sight to a grand ballroom in a sumptuous hotel. Assigned to clean up the remains, a process which entails draining the bodies of blood and other internal matter, are Janice (Kristine Nielsen), a maid, and a second-rate clown named Gary (). 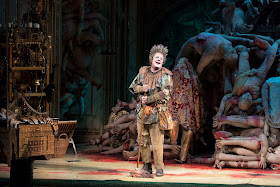 Things do not start off well as the two get down to the gritty business at hand. Janice, a long-time veteran of this kind of process, is all business. She also knowing that they need to be finished by the next morning - the room scheduled to be the site of an elaborate inauguration. meanwhile, is more interested in making jokes in regards to the carnage in front of them, as well as honking the horn he always carries. He is also delighted with himself for having escaped the hangman’s noose. This being the character’s fate in Shakespeare’s Titus Andronicus. Though in this case, some fast-talking and the need for people to assist in the clean-up process, helped to spare his life.

In the midst of taking care of the bodies, suddenly makes a decision. He announcing he will no longer be simply a clown; a profession he's actually always hated. Rather, he will now be a fool. Specifically, a fool of Shakespearian ilk. One of those characters used by the Bard in his plays as an everyman voice of common sense. believing that, with these attributes, he save the world and thus make things better for everyone. Or at least he can now get enough people to listen to him so they can help him to change things.

With , Taylor Mac has come up with a satirical tale containing more than a hint of topicality. One showing hope rising from the ashes of despair, and where the seeds for a new society are sewn amidst the devastation caused by the present one. These possibilities leading to some heated discussions between the characters. As when takes Janice to task for burying her head in the sand and ignoring what’s been going on around them, instead of trying to find some way to stop it. Janice coming right back at him saying how someone needs to be around to clean up after the battle is over – this being far from her first massacre. She also making clear that she has long understood how the world works, and how important it is for those who survive to make sure things return to normal. Even if the normalcy is only a cosmetic change, with the underlying problems remaining the same, no matter who's in charge. Adding another perspective is the midwife Carol (Julie White); a traumatized victim of what has occurred, who is desperately trying to find something important she has lost. 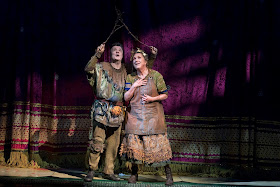 is billed as “a new comedy” and there is certainly a lot of humor in the piece. More than 90% of it delivered by Lane - look for a funny bit regarding the position of the sun. At least some of which fulfills Mac’s purpose of getting the audience laugh at the most inopportune moments. Unfortunately, all too often, things devolve into half-hearted campiness, continual mugging, and the using of anatomically correct corpses as props. All of which gets very old, very fast.

When doing a so-called sequel, it’s also best to quickly establish any connection to the relevant source material, and then start building a new story from there. Past successful stage examples of this include A Doll’s House, Part 2 and Rosencrantz and Guildenstern Are Dead. The latter which also spotlights initially minor characters in a Shakespearian work.

Here however, the exposition takes the form of a far too-lengthy monologue by Lane. As well as frequents asides and references to the characters in Titus and what happened to them – all of which only serves to bog down the play with unneeded information. While one could argue that Titus is one of Shakespeare’s lesser known plays, it would have been far better if the show simply used any past events as a springboard to a new story, rather than repeatedly explaining what has come before.

There is also a problem with George C. Wolfe’s direction. The play at times feeling more aimless than engaging; with a story often wandering about in search of a through line. As a result, any message the play purports to have is buried in a sea of excess verbiage and eventually collapsing under its own weight.

The ironic thing is that beneath all the pontificating, one finds a powerful mortality tale with an important message to impart. However, as things stand now, is basically a 30-minute masterwork trapped in a bloated exercise more than three times that length.

: A Sequel to Titus Andronicus
By Taylor Mac