Who would have thought Julius Caesar would be turn out to be a moderate sort? At least that’s how he appears in George Bernard Shaw’s seldom-seen comedy, Caesar and Cleopatra. Written in 1898 and presented by Gingold Theatrical Group at Theatre Row, the play offers some valuable lessons on wisdom born of experience, and the dangerous impetuousness that comes with youth.

In ancient , Roman commander Caesar (Robert Cuccioli), head of a conquering army, has a chance meeting with Cleopatra (Teresa Avia Lim), the young Egyptian Queen. At first bemused by her impetuous attitude - and her fear of the approaching Roman soldiers; she thinks they will eat her - he quickly sees possibilities in this young upstart. His plan being to mold her into someone who will rule in his stead when he departs. Caesar's efforts met with the initial displeasure and eventual grudging consent of Cleopatra's Chief Nurse and defacto ruler of the royal palace, Ftatateeta (Brenda Braxton).

While Cleopatra soon begins to grow into her role - as evident from the way she carries herself, and by the clothes she learns to wear - her actions show her to still be very much a child. Especially when it comes to choices made in the heat of anger. The results of which neither Caesar or Cleopatra can afford. being in turmoil when it comes to the leadership question. A situation Pothinus (Rajesh Bose), guardian to the young King Ptolemy, is doing his best to inflame. 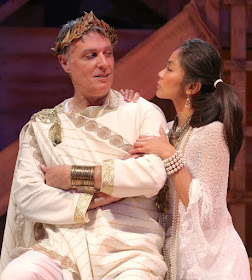 Containing more than a few elements of Shaw’s later work, Pygmalion, Caesar and Cleopatra is all about the teacher/pupil relationship. However, where in Pygmalion, the student eventually outgrows the teacher; here it is the teacher who is firmly in control. A keen military strategist, and a student of human nature, Caesar understands just how far he can cajole, threaten and push those who oppose him. Violence always being for him, the final option. Of course, the underlying message here is that those who do not heed Caesar's warnings, do so at their own peril. As one person, who stays too long where they are not wanted, ultimately finds out.

As with most of his plays, one can find numerous examples of Shaw’s caustic wit sprinkled throughout. The chronological differences between the two main characters being a frequent subject of discussion and through it, a window into the play's take on the eternal battle between youth and age - and which of them actually knows best. Though it should be noted that Caesar himself is far from infirm and can still indulge in a bit of youthful exuberance under certain circumstances. The show also takes the occasional poke at late 19th century British society – another favorite target of Shaw's – through the character of Caesar's loyal servant, Britannus (Jonathan Hadley).

Cuccioli does an excellent job as Caesar. The actor bringing a genial, and at times almost whimsical world-weariness to the character. While never letting anyone forget the power he commands. Lim is fine as Cleopatra. No Eliza Doolittle here, the actress shows Cleopatra as one who too quickly becomes the person Caesar tries to create. She embracing her new role, but initially unprepared for the responsibilities that go with it.

Braxton is fine as the officious, but always to be reckoned with Ftatateeta. Jeff Applegate is very good as Rufio, basically matching Ftatateeta when it comes to loyalty; and someone always more comfortable when he has a sword in his hand. Bose gets in some good political points as Pothinus, and Dan Domingues offers enjoyable comic relief as Apollodorus - the Sicilian. 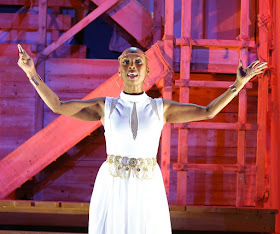 Despite its many pluses, the Gingold presentation also suffers numerous missteps. David Staller's direction in particular, never able to make the production feel anything more than amateurish. As such, one is never truly enveloped in the story. The entire presentation lacking any real passion, which makes it hard to care what happens to any of the characters on an emotional level. There is also never a true feeling of danger or peril present in any of the more tension-filled moments of the story. Something those involved with the production needed to find a way to properly bring out.

This is a work that also screams for something more than the “one size fits all” set design by Brian Prather used here. Ftatateeta also acting as a narrator of sorts during various transitions from scene to scene and location to location. Some of Frederick Kennedy’s sound effects also come off as more laughable than realistic.

Caesar and Cleopatra is an intriguing work with some very important points to make. But this production, despite an excellent cast, is unfortunately not able to do its message full justice.