A feeling of despair lurks just below the surface in A Lovely Sunday for Creve Coeur. This seldom-seem Tennessee Williams drama, which had its initial run in 1979, now being given a sturdy revival Off-Broadway by La Femme Theatre Productions.

It's the late spring of 1937 in , and Dorothea (Jean Lichty) is a high school teacher approaching that nebulous age bracket for what used to be called an unmarried spinster. Dotty, as she is known to all, making great efforts to keep that perception at bay. Undertaking a series of daily exercises, dressing like a person ten years her junior, and continually keeping her eyes out for romantic prospects. Of late she has reason to be hopeful in the marriage department, having recently caught the attention of the well-to-do T. Ralph Ellis. On this particular Sunday morning, Dotty is anxiously waiting for his promised phone call and instructs her roommate Bodey (Kristine Nielsen) to keep the telephone line clear.

Bodey, a single woman who, as later pointed out, will never see forty again, is working overtime to arrange a match for Dotty and her brother, Buddy. Bodey giving her sibling continual advice on how to act in that regard. Dotty however, sees Buddy as someone not at all her type and has long since become annoyed at Bodey's matchmaking efforts. Dotty also making clear that she will definitely not be joining the two today on a picnic at Creve Coeur; a local lakeside area not too far from the end of the streetcar line. 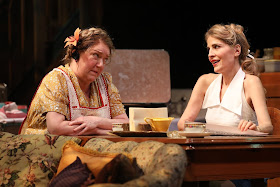 Dotty and Bodey's various plans for the day are suddenly interrupted by the unexpected arrival of Helena (Annette O'Toole). A forceful, no-nonsense type who teaches at the same school as Dotty, she has come to discuss some important matters. Dotty having previously agreed to move in with in a more fashionable area of the city. A location not at all convenient to Dotty's place of work, but a much more socially acceptable section of town than where she lives now.

Dotty and 's plans were completely unknown to Bodey until this moment. The apartment's already tense atmosphere becoming even more so with Helena and Bodey's caustic comments to one another. Dotty, whose health is not always the best, finding herself caught between them while desperately trying to maintain her own sense of equilibrium and emotional sanity.

It’s strange that A Lovely Sunday for Creve Coeur is not performed more often, as the Williams text offers a richly layered work. One which also offers some powerful acting opportunities for the cast. In many ways the play recalls A Streetcar Named Desire, with Dotty in the Blanche DuBois role of a fading Southern belle. Dotty, like Blanche, trying to create a fantasy world of how she feels her life should be. Which is one reason why she buys the type of clothes she wears. Others being to attract a eligible man, and to prove to herself that she's still desirable to the opposite sex.

Also present in the play is a painful air of resignation as the characters are forced to accept the crumbs life has to offer, rather than anything more substantial. A telling conversation in this vein being when Bodey continually reiterates her desire for Dotty and Buddy to end up together. Yet while Bodey clearly wants to help her brother in this endeavor, it's also clear that she desperately needs something else such a relationship can provide. Specifically, the presence of children. Then she can get to play the loving aunt and not be alone in the years to come.

In an interesting bit of irony, the characters of Bodey and Helena - the two mixing like oil and water in their conversations and worldviews - are more alike than either will admit. Though to be fair, one is better dressed. Helena making clear how she refuses to wind up as part of a gaggle of unmarried women with only their gossip to keep them company. Yet her plan to move into a building with the more fashionable set, where one's duties include playing bridge with the right kind of people, reveals the same need as Bodey of not ending up alone. 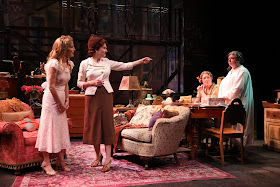 Lichty, Nielsen and O'Toole are all excellent here. Each bringing their role to life with the stories and scenarios their characters have created for themselves in an attempt to make their dreams come true. Nicely rounding out the cast is Polly McKie as Miss Gluck; a lonely and elderly neighbor to whom Bodey has opened her door. Both Dotty and bound and determined to avoid Miss Gluck's fate of depending on the kindness of strangers.

Austin Pendleton's direction is well done, though a bit awkward at times. Especially in the early stages of the play, which is rather talky and takes too much time to get where it’s going. Harry Feiner's set offers a nice lived-in and claustrophobic feel, and his lighting design also works well. Beth Goldenberg's costumes are very good. The standout being the outfit worn by O’Toole.

A Lovely Sunday for Creve Coeur present a picture where hope brutally collides with harsh realty - both from within and without. The different characters in the end, inevitably sadder but wiser by what they have been forced to face.

A Lovely Sunday For Creve Coeur