This fall, The Resident Acting Company, a new troupe drawn from the performing ensemble of The Pearl Theatre Company, will present "The Language Series," a new readings series at The Players Club, 16 Gramercy Park South. The series is devoted to plays that delve into the use of words to lie, deceive, manipulate, conquer, tell the truth, work out the meaning of life and even to find love.

It launches Monday, September 24 with Shaw's "Don Juan in Hell," followed by Cowley's "The Belle's Strategem" October 29 and Pirandello's "It Is So (If You Think So)" November 19.

The company will explore ways that playwrights have used language to portray the human condition, to get to the heart of how we communicate, and to understand reality itself. All three plays explore questions of fake or real, true or false and truth that isn’t truth. Through the lens of these classics and their approach to language, the troupe aims to help us sharpen our perception of the rumors, reports, misleading statements and alternative facts we now experience every day. 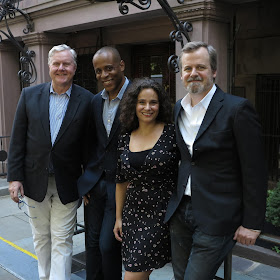 September 24, 2018
"Don Juan In Hell" By George Bernard Shaw
$35
6:00 PM Cash Bar, 7:00 PM Reading
Don Juan is in Hell and he’s not happy. Turns out Hell is where most people go when they die and it’s actually a very nice place. He is determined to go to Heaven so he can contemplate the great questions of human existence, but first he must debate Satan, an ex-girlfriend, and her father, whom Don Juan killed back on earth and with whom he has become very good friends. This is Shaw’s hysterical funny dream sequence from his play "Man and Superman." Shaw presents us with a fun, playful and thought provoking examination of Religion, Marriage, Death, and the all-powerful Life Force. With Bradford Cover as Don Juan, Dan Daily as The Statue, RJ Foster as The Devil and Rachel Botchan as Ana. Directed by Bradford Cover.

Oct 29, 2018 7:00 PM
"The Belle’s Stratagem" By Hannah Cowley
$35
6:00 PM Cash Bar, 7:00 PM Reading
In 1780, David Garrick presented this play at The Drury Lane and it was a smash success. Letitia Hardy is engaged to marry the handsome and wealthy Doricourt, but there is one problem – he has agreed to marry her but seems totally uninterested in her. She loves him and is determined to get him to feel the same. So she endeavors to get him to hate her as she believes it will be easier to flip hate into love rather than indifference into love. With a cast of wild characters--including Flutter, Miss Ogle and Sir George Touchwood--we galivant through the amusing misadventures of these anti lovers until they reach their final realizations in a “crazy” final scene. Casting TBA as of this writing.

Nov 19, 2018 7:00 PM
"It Is So (If You Think So)" By Luigi Pirandello
$35
6:00 PM Cash Bar, 7:00 PM Reading
What do you do when a new family moves into your small Italian town? You absolutely welcome them and ask them where they came from and why they moved here. However when each member of that family gives you a vastly different version of their story, what do you do then? In this wonderfully absurd piece of theater Pirandello asks us to examine why we think we know certain things. The play creates a hilarious world in which one doesn’t know who to trust, and the more we learn the less we know. It is possible to learn the truth, right? Translation and casting are TBA as of this writing.
Byrne Harrison at 11:36 PM
Share