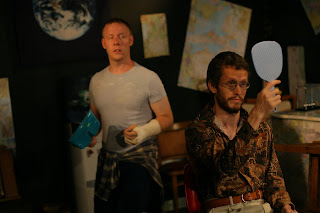 Will LeVasseur and James Stewart
Photo by Ben Strothmann

As we move further from those days, it's worth remembering the human toll that the AIDS crisis took in the '80s and '90s. Not just with the deaths, though those were certainly horrifying, but in the lives of the people who were left behind as their friends, lovers, and neighbors died around them. To some of these survivors, living with the burden of memory and fear may have seemed worse that succumbing to the illness.

Two of these battered survivors are at the center of Steven Dietz' touching and funny Lonely Planet. Jody (James Stewart) runs Jody's Maps and is so frightened by what's going on around him that he can no longer bring himself to go outside. His best friend, the puckish Carl (Will LeVasseur), deals with it in his own way – he collects chairs and brings them to Jody's store. Though Jody protests, the chairs grow in number, blocking the aisles, stacking up in corners, filling the shop.

Jody is a broken man. Horrified by the world around him, he retreats into his store and himself. Maps make sense to him; they are fixed in time and space, unchanging. But even maps have issues. Like the Mercator distortion that makes Greenland look as big as South America, we accept those distortions in order to move from Point A to Point B. But as Jody realizes, eventually, those distortions can get you. Carl reacts in a different way. To Jody, he seems to be an enigma. One day he claims to restore art. Another, he's a reporter or a cop. Fluid and ever-changing, he seems to be a pathological liar. But his lies, like the chairs he collects from his friends who have died, have a purpose, and in a particularly moving monologue late in the play, Carl explains all.

Carl slowly readies Jody for his eventual return to the world, and the AIDS test that he has been avoiding for fear that it holds a death sentence. His humor, grace, and occasional tough love eventually save Jody from him self-imposed exile.

Dietz' play is well produced by Redd Tale Theatre Company. Director Stanley Brode takes a gentle approach to direction, allowing the actors and the situations to set the pace and providing a natural feel to the play. Designer Jessalyn Maguire does a good job with the set, though despite Jody's insistence that the store is getting overrun by chairs, the large space at the Spoon Theatre never really feels that full.

James Stewart does a good job showing both Jody's fear of life and broken spirit, as well as the friendship he has with Carl. LeVasseur is excellent as Carl. With his broad smile and his seeming enjoyment at playing Carl's quirks, he serves as an excellent counterpoint to Stewart's inhibited Jody. Watching the two men as their roles reverse, Jody's sternly parental relationship with Carl being slowly eclipsed by Carl's patiently and lovingly parental caring for Jody, is very moving.

Though Dietz' play does at times seem a little like a souvenir from another time and place, it is a hearfelt and well done production.