Review – Cake and Plays . . . But Without the Cake (At Hand Theatre Company)

Cake and Plays . . . But Without the Cake is an evening of one-act plays by emerging playwright Jono Hustis featuring Cow and Shakespeare, Monsoons, and In the Name of Bob. While the plays are not all of the same caliber, they do add up to a fun evening of theatre.

The first of the plays, Cow and Shakespeare, finds Will Shakespeare (Michael Hartney), a particularly untalented writer, trying desperately to start and finish a play that is due to be given to his theatre company the next day. Fortunately for him, a Cow (Michael Micalizzi) in nearby pasture overhears his cries of frustration, not to mention his extremely bad prose, and offers to help. Being a selfless cow with a sublime writing talent, he offers to supply young Shakespeare with 40 or so plays he's written himself – Hamlet, Romeo and Juliet, and The Taming of the Shrew, just to name a few. While the ultimate outcome of Shakespeare's interaction with this cow is fairly predictable - it centers around an invitation to dinner - it is nonetheless entertaining. Both Hartney and Micalizzi do a good job with their roles; Hartney with a decidedly tongue in cheek attitude and Micalizzi with a bovine insouciance. However, it's the little details, from Stephani Lewis' East Village inspired costumes, to the quill made from a Crayola marker with a feather taped to it, that add to the sense of whimsy in this play.

Monsoons, the second play of the evening, shows what might possibly be one of the most cringe-inducing blind dates on record. Jack (Craig Mungavin) and Theresa (Morgan Lindsey Tachco) are clearly not meant to be together. As they stand drinking their $4 coffees while Jack says one wrong thing after the next, the scene gets funnier and funnier. Though there isn't much to this play, it will resonate with anyone who has ever been on an uncomfortable date. Again, both actors do good jobs with their roles, but it is Mungavin who shines as the befuddled Jack as he tries to walk through the minefield that the date has turned into.

The final play of the evening, In the Name of Bob, is a genuinely sweet tale about Alicia (Darcy Fowler), a woman who was badly hurt in a relationship and has been unable to move on, and Marvin (Andy Gershenzon), a frenetic ball of energy who is either unbalanced or a guardian angel sent by Bob (God's real name) to help Alicia move on. The chemistry between Fowler and Gershenzon is marvelous and Fowler does a particularly good job moving from fear to bemusement to friendship to something more as Alicia opens herself up to the possibility that Marvin may indeed be her guardian angel. Gershenzon plays Marvin as a live wire, pulsing with a wild energy that is meant to shock Alicia from her dull routine and make her take a chance and truly appreciate the life she's been given. In the Name of Bob is delightful and certainly the high point of the evening.

Featuring Jono Hustis' amusing plays and snappy dialogue, good direction from Daniel Horrigan, and a talented cast, Cake and Plays . . . But Without the Cake puts another check in At Hand Theatre Company's win column. 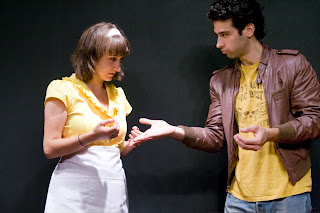 In the Name of Bob's Darcy Fowler and Andy Gershenzon