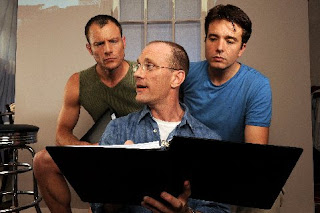 Considering its reputation as a haven for artists of all kinds, it comes as no surprise that theatre is thriving in Provincetown, especially during the summer season. Also not surprisingly, much of the theatre is geared toward the LGBT community, either overtly as with Varla Jean Merman’s camp parody Shut Up Sweet Charlotte, or less so with the Provincetown Theater’s production of Terrance McNally and David Yazbek’s The Full Monty. Given the title of James Edwin Parker’s play 2 Boys in a Bed on a Cold Winter’s Night and the warnings in its publicity materials about its nudity and sexual situations, this play clearly falls into the former category. Those looking for a light comedy or an opportunity for some voyeurism may be surprised to find that they’re attending a thoughtful play about love, desire and relationships, and while both performers are certainly attractive, they are also remarkably good actors.

The title of the play sets the stage rather nicely. Daryl (Scott Douglas Cunningham) and Peter (Spencer Quest) are enjoying some post-coital napping in bed on a cold winter’s night. Having just met that evening at a bar, neither really knows anything about the other, except that they share an attraction and that they had some great sex. Peter, rugged and taciturn, wants to sleep, but Daryl is chatty. He wants to discuss relationships, jobs, and generally try to determine if he and Peter are compatible. Daryl is looking for a boyfriend; Peter is just looking for a good time. Though it seems this will be a play about two opposites who may or may not make a lasting connection, Parker’s play is more complex. Neither character is quite what he seems and it’s this unveiling and discovery that gives the play its most interesting moments.

Cunningham makes a very believable Daryl. As a “pretty” gay man nearing 40, Daryl has seen the writing on the wall. Having not had a relationship lasting more than a few dates in years, he desperately wants some sort of human connection. Lost in nostalgia for his youth and his last somewhat successful relationship, he has trouble connecting in the here and now. His need for intimacy comes across as desperation, especially when he blurts out the “L word” at an inopportune moment. At times like a friendly puppy, at others shrewdly calculating and bitter, Daryl allows Cunningham to show some good range.

Despite his lack of theatre credits – his only other one is the NYC production of Naked Boys Singing - Quest is remarkably strong as philosopher/construction worker Peter. Quiet and sexy, Peter seems as self-assured at Daryl is needy. It isn’t until the end of the play that Peter allows this façade to slip and the audience glimpses some of the pain that his cocky manner hides. Quest excels in these quieter, more vulnerable moments.

Like many plays from the early ‘90s, 2 Boys deals with AIDS, but it is not an AIDS play, per se. AIDS is more of a metaphor for Daryl’s general fear of life and love and what drives Peter’s hedonism. And though it deals with a couple of gay men, it’s not really a gay play. The issues that are being discussed, the fear that both characters deal with, and the yearning for love and intimacy that everyone craves are universal, and that is the strength of this play.

Ably directed by David Drake, who brings out the humor and poignancy in Parker’s script, 2 Boys in a Bed on a Cold Winter’s Night is a strong production of an interesting and thought-provoking play.

Through Tuesday and Wednesday at 9 PM through August 27th
For tickets visit OvationTix.