From the moment you walk into the Actors Temple, you know you're in for something different.  How many one-person shows have a jazz combo on stage?  How many have audience warm-ups to get them in the mood?  How many have a woman with that much hair?  And how many feature an outstanding talent like Rain Pryor? 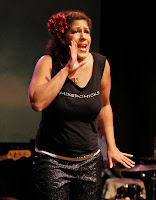 Let's start with the obvious.  Rain Pryor has a fascinating story to tell.  She's the daughter of comedy legend Richard Pryor.  She grew up bi-racial (black and Jewish, hence the title of her show "Fried Chicken and Latkes") in Beverly Hills.  She has had experience that many of us haven't, not by a long shot, but she is able to make them absolutely relatable.

"Fried Chicken and Latkes" covers many chapters in Rain Pryor's life, and she brings to life many of the people who are important to her (her father, of course, features prominently, as do her mother, her Jewish grandmother, her black great-grandmother, her childhood friend Wanita, among others).  Pryor is great with voices, giving each character a distinct and realistic personality and sound.  Her imitation of her father is often hilarious, and at times downright heartbreaking.

Her stories are amazing, especially since they are true.  Having to deal with racial epithets (and how her mother took to task the principal who punished Rain for what she said back to her tormentor), dealing with the rich girls who wouldn't believe she was Jewish, making her first close black friend (Wanita), being raised by her mother while her father dealt with his issues with drugs and womanizing--all of this could have led Ms. Pryor down the path that many children of celebrities travel.  Instead, she grew to be an amazingly centered and self-aware person.  And created an entertaining show out of those experiences.

In addition to being a talented actor, Pryor is an excellent singer, as she demonstrates several times throughout the show.  Starting with a big number about being black and Jewish, sung to the tune of "Cabaret," to a cheerleading number, to a lovely version of "His Eye is on the Sparrow," Pryor shows off her vocal chops, including a version of "God Bless the Child" in the style of different singers.

I may not have known what to expect from "Fried Chicken and Latkes," but what I got was a very entertaining show, some terrific insight into Richard and Rain Pryor's lives, and a deep appreciation for just how talented Ms. Pryor is.  I understand the show will be coming back in the fall (it is currently on hiatus after a year-long run).  As soon as it comes back, I suggest you get tickets.