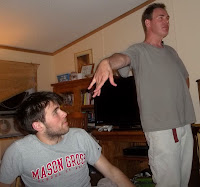 Sidney Stein (Jim Pillmeier), the title character in Brian C. Petti's "The Love Song of Sidney J. Stein," is a man with a mission.  After a youth spent "in the life," Sidney is spending his adulthood working at a shelter for street kids, many of them LGBT youth who, like him, have been forced to sell their bodies to live.

Sidney's is a quiet existence, his meager salary supplemented by an inheritance from his mother.  He doesn't even seem to realize just how lonely he is until a teenaged hustler named Dennis (Dalton Gray) comes into his life.

Dennis is handsome and used to charming whatever he wants from men.  Sidney is wise to his tricks, having used them on men himself when he was Dennis' age.  As he and Dennis get to know each other at the shelter, they begin a cat and mouse game, each wanting something from the other --Dennis wanting money and drugs, Sidney wanting an escape for Dennis from the dangerous road he's walking.

Sidney becomes a surrogate parent to Dennis, eventually inviting him to stay with him at his home.  Under Sidney's guidance, Dennis seems earnestly to want to leave the street behind him.  And despite numerous disappointments and episodes of backsliding, Sidney desperately wants to believe that he will save Dennis, and that he will redeem his life the same way Sidney did.

But redemption, when it comes, has a very high price. 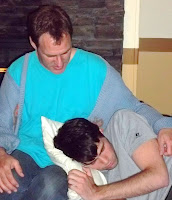 There is a lot to like in this production, starting with the cast.  Pillmeier's Sidney is in many ways fragile and damaged, and uses an arch, campy facade to keep the world at arm's length.  Gray's Dennis has a feral charm, and is a master at playing his cards close to the vest.  Since Petti has scenes which show a slightly older, more mature Dennis and a young, hustler version of Sidney, both actors have a chance to stretch a little and show completely different versions of their characters.

Petti's play is interesting in that it is comprised of a series of short, not always sequential scenes.  They jump through time to give insights into the characters and the action in "present time."  It's an unusual technique, but one that works well.

Unfortunately, these short scenes also serve to give the play a somewhat rushed feel, one that is exacerbated on several occasions by Pillmeier's delivery.  At times Sidney's dialogue comes so quickly, that it seems to be somewhat independent of the scene.  It feels that it's less about responding to what has been said, and more about getting the line out as quickly as possible (one particular scene had Sidney on the phone chatting with his sister with pauses so short that she would have been unlikely to have said more than a word or two).

His speedy delivery, however, works well when Sidney is highly emotional--a scene when Sidney is hysterical after a particularly monumental betrayal by Dennis is an excellent example.  During that scene, Pillmeier speaks so quickly that he is forced to take gulping breaths; it is perfect for what Sidney is going through, a moment of panic so absolute that he could barely remember to breathe.

Made up, as it is, of a number of short, not always chronologically sequential scenes, the play has a number of scene and costume changes.  These are not always smooth, and often take longer than they need to.  Both the awkward scene changes and the generally rushed pacing seems to indicate a certain hesitancy on the part of Brian Petti as director of the production.  His writing is solid, but this piece feels like it needs a director with a surer touch.

Part of this may simply due to the vagaries of being in a festival, and I would welcome the chance to see Petti direct again in the future, or to see a non-festival production of "The Love Song of Sidney J. Stein."

Produced as part of All Out Arts' Fresh Fruit Festival
Byrne Harrison at 7:00 AM
Share