This is the second time I've seen a performance of Myra Slotnick's moving play, "The Weight of Water," about life and death in post-Katrina New Orleans, but my first full production (the previous version I saw was a staged reading featuring the same cast).  In addition, StageBuzz contributor Greg Waagner reviewed the Provincetown premiere, declaring the production "buoyant and beautiful."

Aside from being an interesting commentary on the people left behind during and after Katrina, Slotnick's play covers a myriad of other issues - loneliness, the desperate need to start over, home, crushing loss, mental illness, resilience.  It's a beautiful and fascinating piece of theatre.

The story revolves around Pearl (Geany Masai), a Katrina survivor, continuing to live in her ramshackle house as the waters slowly recede.  Her peace, such as it is, is interrupted by Finch (Andrew Clemons) and Natalie (Jamie Heinlein), a pair of grifters who see opportunity in disaster.  She is also haunted by memories of her husband Emery (Jimi Little), a hard-drinking musician.  Narrated by The Musician (Linda Daniels), whose identity is revealed late in the play, "The Weight of Water" is a thoughtful and well-written show.

The performance I saw, however, felt a little off.  Having seen this cast in the previous staged reading, I feel confident saying that what I saw was not a reflection of the cast or David Drake's direction, but just an off night.  The performance seemed sluggish, with a number of bobbled lines and timing issues.  This was most noticeable during the scenes between Masai and Clemons.  They didn't feel like they were quite connecting, and given that their scenes comprise most of the early part of the play, it was noticeable.

This was less of an issue in the scenes with Masai, Clemons and Heinlein.  Heinlein brought a great deal of energy to her portrayal of Natalie, and this intensity drove those scenes.

Masai was at her best when she was showing Pearl's confusion and vulnerability, especially when Pearl would dip into the past.  Her scenes with Little were terrific.  His Emery was a joy to watch, and Masai was a virtuoso at showing Pearl's love and frustration in both her words and actions.

Linda Daniels enigmatic Musician was spot on, and reminded me of many of the interesting people I've met in New Orleans over the years - unflinchingly loyal to New Orleans, with a touch of otherworldliness that pushes her slightly out of kilter.

David Drake's direction was solid, and production had a nice rhythm - an ebb and flow not unlike the muddy waters surrounding Pearl's home.

"The Weight of Water" is well worth seeing, and I look forward to future productions. 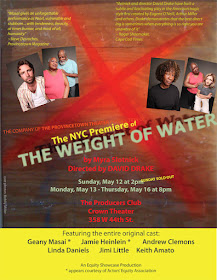