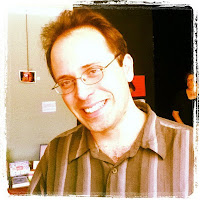 I first got involved with theatre as an actor in my first year of high school. I was in the musical "Anything Goes." My theatre teacher, Phillip Brown, wanted me in it because he said I was funny to look at, that he started laughing just by looking at me. (This trend also continued into my high school dating life ironically.) It was my first time acting and I loved it. I was the character of Ling of the two part duo in "Anything Goes," Ching and Ling. I was a white kid who they made into an old Chinese man. (These were the days before political correctness really made it's way into the schools.)

Later on, I began writing my first play in college called "Lost in a Daydream," because I was bored in a math class. At the end of the semester, I had a play and an A in the class.

My influences are whoever the people I am working with at the moment. So in this case it would be the cast of "Subject 62." Brad Kirton, for his unwavering dedication to dig deeper and ask hard questions each go round, Missy Marine for her joy of acting, her charm, and her natural likability on stage, Elyssa Baldassarri for her determination, her, talent, her fierce portrayals and honesty in anything I write, Mat Clerrico for his heart and his natural ability to make everything better on the stage, David Adams Murphy for his original, alive performances which grab me every time, Julian Trilling for her lovely characters and being genuine, Ama Appiah for her energy and her strong characterizations, Melissa Corbett for her strength onstage and readings of characters which make it different than what they sounded n my head, but better than I could ever think up, Dan Martin for his dark humor and his striking characters, Samantha Lee Preston for her original ways or looking at things and portraying them, Dave Almeida for his heart as well as his thoughts, Dave is a talent and a unique wonderful person, Geoff Monti for his verve and his unique amazing spirit, Jim Belanger for his crazy yet amazing ideas that constantly surprise and exhilarate me, Lloyd Felix for his artistry and his views both amazing, and my wife Sara Hutchings-Schwartz for her creativity, her spirit, and for being the one person in my life I never stop loving or learning from . And my daughter Callie who is my everything,

These are the people who inspire me and they all deserve mention and are of note. I couldn't ask for a better cast. These people are wonderful.

My only word would be for people to come and see these performers. And if you like what you see then hire them. And you'll never regret your decision.

"Subject 62" is a surreal dramas about an artist, Chris, who is afflicted with a degenerative disease called Huntington's.  When he is signed up for a unique experiment to find a cure, he finds himself trapped in his memories, losing them as he tries to hold onto a single one to take with him.

What inspired you to write "Subject 62?"

This play was written because Huntington's is a disease that hasn't been seen too much in the media. I also wanted to write a play where a man's memories fall away from him, almost disintegrating in front of him from scene to scene. I decided to combine the two ideas. As the disease advances in the show, the main character loses memories right in front of his eyes. At that point I had to write the script as I could not get it out of my head. I'm still having trouble actually shaking it from my head... so I have no choice but to do it.

Huntington's Disease Society of America. It fit pretty well with the show! (laughs)

And please read up on the things they do at their website. Wonderful organization, worth contributing to.

What's next for you after Planet Connections?
Rest! But then a ton of things after that.

November I will be directing a play I wrote in RI about Lucille Ball. It is a biography-play and the script is done ready to go. Very excited about that one.

In December, Scorpio Film Releasing will be premiering their new film which I wrote called “Normal”  It stars Michael Reed, Sarah Nicklin, Nay Sylva and an incredible group of actors directed by Richard Marr-Griffin. More on that as it gets closer, but it's been shot and what I've seen of it looks amazing. Also, the film I wrote for them previously called “Murder University” has received worldwide distribution for DVD and PPV, etc., this October! Very excited about that as well. Details forthcoming. I have also completed a draft of the film version of “Accidental Incest” for Richard as well, the pay I directed and wrote for last year's Planet Connections Theatre Festivity.

I also have two other film projects coming up from Breaking Branches Pictures: one is a film script I have been writing with them called “Rhodyopolis” and the other is an adaptation of this play, “Subject 62” We have a draft we like of it, just needs a rewrite or two but the that should be ready as well!

And more to come beyond that as well!

Finally, what was your best “theatre moment” - that one moment, either onstage or off, that was so sublime that it stayed with you?

The one moment I can never forget, that is so sublime, was that my wife came to the very first show that I wrote and directed in 1996. She made her dad drive 5 hours to get down to see it (we weren't even dating at the time) and she saw the show. We had talked a few times before that, but that night was special and I'll never forget it. The first time I saw her I knew she would be my wife. But that night confirmed to me how good the ride was going to be. 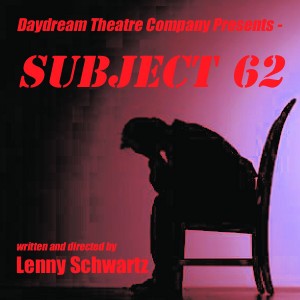