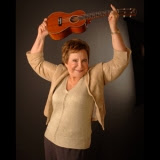 D’yan Forest (actor/writer/producer), 78 years young, has been lighting up audiences for over seven decades.  She started early with piano, then ukulele, moved onto trumpets, drums, and the glockenspiel.  Her music took her on global performances in Paris, Israel and Greece.  After returning to the states, this native Boston girl moved to New York City, and has made a successful career singing in 9 languages in the tri-state area: Waldorf, Plaza, and Park Lane among others.In addition to national commercials and international print campaigns, her credits include “Gigi,” “Grandma Sylvia’s Funeral,” and Shaw’s, “The Music Cure.”  Her principal role as the mother in “Soldier’s Heart,” has been screened in numerous film festivals throughout the world.  She’s branched into a new career as a ukulele playing comedian appearing at the Gotham, Comix, Carolines Comedy Club, the Duplex, and the Metropolitan Room.

What’s your show about?

The power of love.  And that it's amazed me to see how people will deprive themselves the power of love, especially as they age.  As time passes I’ve become acutely aware of the lies we tell ourselves in order to get the love we long for, even if it is not the love that feeds our soul.  I wanted to share the comedy, candor and complexities of my bi-attractions that are explored with humor and pathos in a show.  And I do it with comedy and song, playing the ukelele, the trumpet and the glockenspiel.

I always wanted to share the unusual adventures from my attractions and first sexual stirrings starting in my bunk at Camp Takawalananakiki, that have taken me across the Atlantic to the smoke-filled clubs of gay Paris.  It's almost like educating people that sex is something ongoing and long lasting.

Who else is involved with the show?

Stephen Jobes is my right-hand as co-writer and director.  There's my assistant director Meghan Kennedy, and production manager Andrew Alton.

Who is your dream audience for this show?

A Day in the life of Miss Hiccup - she's great.  And My Three Moms.

The Orlando Fringe Festival in May.

My Pussy is Purrin' Again! plays at UNDER St. Marks on the following dates: