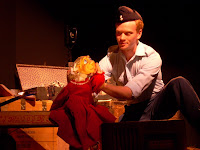 Brendan McMurtry-Howlett has performed "…and stockings for the ladies." in all its incarnations since its creation in 2007. Recent credits include: Geoffrey in The Overwhelming (CanStage/Studio 180), Nicholas in the the Fringe hit Sia (Pyretic Productions), Romeo in Romeo and Juliet (Classical Theatre Project); Puck in A Midsummer Night’s Dream (The Rose Theatre); Wayne Gretzky in John: Sudden Death (NTS); and Josh in Guns & Roses (The Original Norwegian). Brendan directed and co-wrote the play Honey in the Lion’s Head that premiered at last year’s Edmonton Fringe Festival. Film and television credits include: Degrassi: The Next Generation (CTV); Valemont (MTV); and Peripheral (Talon). Brendan is a graduate of the National Theatre School of Canada.

I’m still building my theatrical background. I trained at the National Theatre School of Canada. I was accepted into the acting program right out of high school and was the youngest person in my class. It was after my second year of study, still learning my craft, that I became involved in a tiny no-budget summer fringe festival project: “…and stockings for the ladies.” We blindly stumbled our way through rehearsals and emerged on the other side unsure if anybody would care about what we had spent many weeks creating. But apparently we had tapped into a specific story and form of storytelling that really resonated with people and from that first haphazard summer the show took on a life of its own. Now four years later we find ourselves mounting this show again. This show has been a significant part of my “theatrical background” and although I have been working on many diverse projects in the interim years, this show (my first “paying gig”) has had a major influence on all my work in theatre. I learned a lot about a performers relationship, puppetry, script development, character acting and physical theatre mostly on the fly.

How did you get involved in the solo format?

The short answer is money. This would have been a very expensive show to hire 25 actors to play each character, with one actor this show becomes a lot more economically viable. But of course it goes far beyond that. The actor builds a very different and more direct relationship with the audience through the solo format. In a show like ours there are two separate emotional connections that the audience experiences: they connect to the characters either loving them or hating them following their journey through the whole play; but of course in a solo show all the characters, good and bad, are played by the same actor. It is the emotional connection that develops with the actor, watching another human being jump, spin, yell, laugh, sweat their way through the show, that is so unique in the solo show format. And I feel that connection as an actor too; I rely on the audience, I live and die with them every night, there are no other castmates that are sharing the story with me, just a room full of strangers. It is vulnerable, for everyone involved because in the end it is just the actor, maybe some lights and sound, and the audience. It is the most reduced form of storytelling and I love it.

Who are your inspirations?

I’m not sure if I’m supposed to say someone like Patrick Stewart or Johnny Depp, but I’ve always needed a closer proximity to inspiration in order to really be affected. The people who inspire the most are the actors and artists that I know and work with in Toronto, and many of the teachers that I had in theatre school. One major point of inspiration is a woman named Kate Hennig who was recently starring as the Dance Teacher in Billy Elliot on Broadway. She was a teacher and mentor at school and was one of the few people who have said to me “that is not good enough. I’ve seen you do better, so just do it.” I actually helped her out with lines as she was preparing for the Billy Elliot auditions three years ago. And As cheesy as this sounds, both the writer Attila Clemann and the director Zach Fraser have been huge inspirations. Their previous experience as actors, and their expansive experience with puppetry has opened up that whole world to me in a way I never thought possible. I’ve gained a lot of respect for puppetry because of these guys and I was a pretty big skeptic at first. We work extremely well together having developed a vocabulary with this show over a period of four years and I like to think that we inspire each other through the rather challenging rehearsals. Cheesy I know, but it is what it is.

The play follows many different storylines and depending who you ask and what they connected to the most, you could get very different descriptions of what the show is about. The main through line is the story between Ted Aplin a real life officer in the air force, and Daniel Friedman, based on Stan Winfield who served as Ted’s assistant during the time overseas in post-WWII Germany. Though Ted and the work he did during that time is the main point of inspiration for the show the real journey of the piece is through the eyes of Daniel. At the heart of it, “…and stockings for the ladies.” is a coming of age story. Daniel is a young man who joins the army seeking some obscure notion of adventure and ends up being deployed after all the “action” has happened and their air force group is left to twiddle their thumbs for a year. That is until Ted Aplin recruits a rather unwilling Daniel in his efforts to bring some sort of normalcy and dignity to the survivors of the Bergen-Belsen concentration camp. Amidst a volatile landscape of Nazi collaborators, desperate survivors, and obstinate military commanders, Daniel’s own sense of self is challenged by what Ted shows him and a deep friendship is formed. But sometimes the only way to do what’s right is by sacrificing one’s closest relationships.

If you could get any person (living or dead, famous or not) to come see your show, who would you choose?

Ted Aplin and Stan Winfield, for sure. But the amazing thing about this show based on true events is that there have already been a long list of people who, after seeing the show, came out of the woodwork to say I was there or my uncle served with Ted, or I was the last baby born in the Bergen-Belsen camp. There was one woman at a show in Toronto who came up to me afterwards with tears in her eyes saying “That puppet, that character was based on my mother.” It has been amazingly humbling that after spending an hour and a half on stage people come up to me and tell their own stories. This play opens up a floodgate of everyone’s personal experiences with war and the human aftermath of such epic events. Oh, and Hitler. Just to see his reaction to seeing all of these amazing stories of people who refused to be defeated by his twisted actions.

What's next for you after soloNOVA?

We take “…and stockings for the ladies.” to Halifax and then Toronto; this is the show that refuses to be put to bed. After that I’ll be directing a show going to Edinburgh and working on several other projects for the fall and winter. No rest for the wicked.

"…and stockings for the ladies."
Performed by Brendan McMurtry-Howlett
Written by Attila Clemann
Directed by Zach Fraser