SoloNOVA Festival Interview - Atilla Clemann of "... and stockings for the ladies."

Attila Clemann has worked almost exclusively on collectively devised pieces including award-winning productions of Fathom (SaBooge Theatre), The Overcoat (Vancouver Playhouse) and Brilliant (Electric Company). His work as a performer has brought him from New York to the northern reaches of British Columbia teaching on the way with highlights in the favelas of Recife Brazil and The National Theatre School of Canada. As a cabinet maker, Attila’s craftmanship also frequently calls him into set design and construction. "…and stockings for the ladies." is Attila’s ﬁrst playwriting credit and sources his personal family history.

I am a graduate of a small but renowned Canadian theatre program called Studio 58 as well as Ecole Jacques Lecoq in Paris. These two schools have pushed me into working almost exclusively on collectively devised pieces and new works. I think I have worked on all but two scripted traditional shows; the rest of my 15 years experience has been on completely new work where issues of story, style, theatricality are added to the challenge of creating characters and producing a show.

How did you get involved in the solo format?

Mostly money; it's hard to get a cast of thousands these days. But in terms of this piece, the solo format actually became a real bonus. We wanted numerous voices. It could have been done with several actors playing several parts but the virtuosity of seeing all the characters and voices spring from one body is part of the enjoyment and allows for us to have a cast of thousands on stage without all those bodies physically there.

What are your inspirations?

True stories, little tidbits of strange information, one-liners overheard in coffee shops. These are the stuff of life, the most fascinating part of theatre. As one writer said to me, "Wouldn't it be cool if the word 'fiction' was used to declare something as awesome or amazing; as in 'That's totally fiction.'" Sometimes I hear a strange phrase or story or see a really interesting person and I think: if I put that on stage no one would believe me - that's fiction man, totally fiction.

"... and stockings for the ladies." is a mosaic of voices from post-war Germany; a small German boy, a Nazi doctor, Jewish survivors, Canadian Airforce men, letters home, and much more. Together they tell the story of Squadron Leader Ted Aplin who worked against orders to help survivors of the Bergen-Belsen concentration camp. He was the epitome of a humanist who had no time for religious moralism but would stop at nothing to help his fellow man. Ted Aplin was in a time and place where a man like that could do his best work and despite nearly being dismissed from the army he was greeted with a hero's welcome upon his return. Numerous Jewish families were reunited through his efforts and he was nicknamed the "Angel of Belsen". Ted Aplin is also my step-father's father and his letters home to his wife in the year that he served overseas are an incredible record of the time. As part of our family archives they are poetic and thoughtful and are the very spine of this play. "...and stockings for the ladies." is a post-war story; a period of history we hear little about but need to know more.

If you could get any person (living or dead, famous or not) to come see your show, who would you choose?

Well, if Ted Aplin saw the play that would be incredible. I was given much freedom by Ted's family to write this play as I needed to. They never once interfered but if Ted saw it I wonder if he would actually have a thing or two to say.

What's next for you after soloNOVA?

"...and stockings for the ladies." tours to Halifax and Toronto and will hopefully pick up some more attention for further performances. Otherwise, as a playwright, I am working on a new historical fiction play around Guglielmo Marconi, one of the inventors of the radio, whose famous trans-Atlantic radio signal was received in St. John's, Newfoundland, Canada. It's another fascinating time and ripe for questions around new media and the generational divide that happens as new technology displaces old. 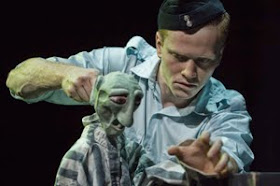