(Not a) Review - Things To Ruin: The Songs of Joe Iconis 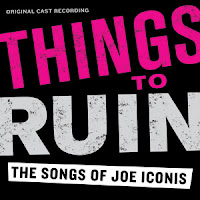 Last night I attended one of the performances of Things to Ruin: The Songs of Joe Iconis at (Le) Poisson Rouge.

Since these performances are meant to celebrate the recent release of the Things To Ruin cast album by Sh-K-Boom/Ghostlight Records, this wasn't open for review, so these are just some observations.

Two songs in, I knew I'd be buying the album.

"Nerd Love" is stuck in my head, and may just become my new theme song.

I teared up a little at "Albuquerque Anyway."

And finally, there are a few young actors showcased in this performance whose careers I'll be watching carefully over the next few years.

There is one more performance of Things To Ruin, March 28th at 10:30, and you can buy the album here.

I'll be posting a review of the album soon.
Byrne Harrison at 1:15 PM
Share