There is something about H.P. Lovecraft's writing that seems to lend itself to radio theatre. I think it's that his monsters and demons are so much scarier when you are being forced to see them in your mind by a well-trained actor using nothing more than his voice and by the skillful use of sound effects. This terror is greater than anything one might come up with oneself by merely reading the words, and certainly more frightening than movies can put together.

Program A of RadioTheatre's H.P. Lovecraft Festival is a well-executed evening of terror and suspense, that accepts and revels in the melodrama of Lovecraft's work, and showcases the talented company's prowess at the radio format.

The four stories brought to stage for this program (Pickman's Model, From Beyond, The Beast in the Cave, and Dagon) are not Lovecraft's strongest. In fact, The Beast in the Cave was written in Lovecraft's mid-teens, and shows a certain self-consciousness in the writing. Though Dagon hints at the Cthulhu stories to come, it isn't as strong as they are. Pickman's Model is a stronger piece, and while From Beyond is a bit overwrought, the actors make it work. Though each is different in style and subject, they all deal with our innate terror of the "other," be it a monster or a man, and the unknown darkness that surrounds us. 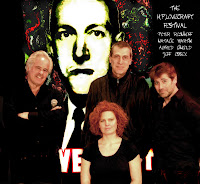 The four actors in this production (Jeff Essex, Alfred Gingold, Natalie Martin, and Peter Reznikoff) do an outstanding job, especially in evoking the style of an old radio play. Their vocal control is excellent, and this program allows each of them a chance to shine. The music and sound effects are terrific, and while I prefer the old school radio plays where actors and sound engineers make the music and sound effects live on stage, using pre-recorded sound and music leads to a more polished production.

If you are a fan of Lovecraft or radio plays, I recommend you attend the festival. I'm particularly excited to find out what this creative ensemble does with The Dunwich Horror in Program B.

The H.P. Lovecraft Festival
Program A - Pickman's Model, From Beyond, The Beast in the Cave, Dagon