Grade 5, Emmet Otter's Christmas; I played Emmet. Since then I received an Honors Degree from Queen's University and have been writing, directing, producing, and performing theatre for the past ten years.

Paradise Lost is a critically acclaimed, one-man, multi-media, theatrical adaption of the greatest epic poem ever written. It incorporates puppets, and computer animation to create an entirely new theatrical experience.

I was traveling through Africa and came across a copy of the poem in a village in Ghana. As a way of flirting with a cute Norwegian traveler, I read it to her on a beach. I don't know what happened to the Norwegian, but the poem and I had a profound love affair, and I knew then I would have to adapt it for the stage.

Jody Burkholder, is an awarding winning lighting designer, and has been my lighting and production designer for the past seven plays I have created.

Jeremy Eliosoff, is a visual artist and computer animator whose work can be seen in several Disney films, The Fantastic Four, and The Watchmen. He's been my best friend since high school and has created computer animation for several of my plays. This is my first collaboration with Lyne Paquette, puppet designer.

Danielle-Ariel Caddell-Malenfant has worked as a Stage Manager for several plays I have created.

I will be directing a production of Perter Shaffer's Equus in Montreal in April and then touring the awarding winning one-woman burlesque play, Miss Sugarpuss Must Die!, which I co-wrote and directed.

If you're a fan of John Milton, you must see this play. If you're not a fan, you will be after seeing this play! 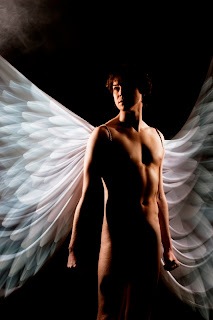