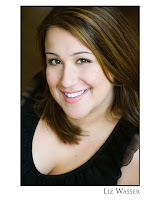 I know it sounds cliche, but I honestly can't remember a time when I wasn't performing. My first actual performance was at a ballet recital when I was three. Throughout the whole dance, I stood there and screamed at the top of my lungs because I really wanted string cheese. My parents realized that acting classes would probably be a better fit. I've been addicted to the stage ever since.

Obviously Bette Midler is on a level that every eccentric, Jewish cabaret chick like me will always spire to but can never hope to reach. She's a musical performer, storyteller and comedian and she's always unapologetically herself. I also had several professors at Muhlenberg College who inspired me in a huge way: they always encouraged me to trust my gut as an actor and to write/perform my own material. And Benedict Cumberbatch. His name always inspires greatness.

In some ways it's what you would expect from a downtown cabaret with showtunes and fun stories and plenty of gay, campy, fun. In some ways, it's a mythological clusterf**k: the Furies are my backup singers and answer three questions of my choosing throughout the performance. There's also a Gary Oldman montage. So, you know... there's something for everybody.

It's strange: it's my first cabaret performance and those are always deeply personal, so in some ways I've been writing it my whole life. As far as inspiration for the Furies, I really owe a lot of credit to Neil Gaiman, author of Sandman. In his books, there are these Women (or three aspects of the same woman) known as Three who appear as the Fates, the Furies, the Weird Sisters and as the Crone, Mother, Whore incarnations of women in literature. They're all knowing, terrifying and epically compelling. The idea of the "three that are one, the one that is three" really intrigued me and made me wonder who they would appear to me if I ever met them. Obviously, I ended up using my three monstrously talented gay friends from college.

My director, Amanda, and I met in college and have worked in Fringe Festivals in the past: she was the one who convinced me to fully flesh out the piece and submit it to Frigid. The gorgeous gentlemen playing the Furies and the exquisite lady on the keyboard are also friends of mine from school. My producer is my roommate. I'm just really lucky that I know so many intelligent, talented people, I guess.

I'd love to move to London and create some theatre there. I have severe anglophilia; sometimes I feel like I'm a character in a Chekhov play and London is my Moscow. In reality, I'm really just focusing on moving my new couches to Astoria.

Something will happen. It will probably be good, but it will DEFINITELY be a hoot. In the immortal words of Lady Gaga, "Let's have some fun, this beat is sick, I want to take a ride on your disco stick."