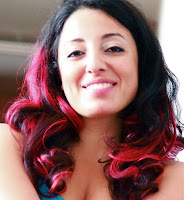 Well, I had wanted to be a US Olympic gymnast but was too pudgy. So I decided to be a famous doctor. But the site of blood made me sick. Then I realized what I really wanted to do was be a shopkeeper in Italy, but I don't speak Italian. So naturally theatre became my heartbeat -- it was the only way could I be everything and anything all at once.

FUNNY A TRUNK SHOW tells the ridiculous story of Mohamed who, after numerous denials at the immigration agency -- (not legible, not the proper forms of ID, used pencil instead of pen) -- returns and this time, brings a trunk full of life -- songs, dreams, memories. A hilarious portrait of the absurdities foreigners deal with in America on a day-to-day basis.

Inspired by a true story, FUNNY A TRUNK SHOW looks at what we leave behind in our search for the American dream -- from the perspective of the eternal foreigner living in the U.S. FUNNY A TRUNK SHOW smashes traditional clown, vaudeville, and bouffant with real life accounts of an incredibly heartbreaking tale -- a patriotic Egyptian immigrant, who will always be seen as an outsider despite his ability to vote. Funny, moving, and undeniably real.

The truth -- I so badly wanted to make something up that was clever, witty, insightful. In the end, it was the truth that won. You can't make this stuff up. I took a heartbreaking tale full of love, loss, paranoia, and a battle of custody and made it ridiculous.

Christina Augello -- Artistic Director at EXIT Theatre in SF -- has supported my work for over 8 years. This year A Denmo Project is a proud resident at the EXIT. www.sffringe.org

Christian Cagigal is my collaborator for the piece. He basically says 'that's awesome', 'that's better', or 'what about this'? He helps make things happen. I love him to pieces. He's also a magician and a performer who makes awesome things happen. www.christiancagigal.com

Wesley Cabral - Road Crew - he schleps heavy things from here to there. He designed a simple set we can travel with and makes great pancakes. What more can you ask for? www.wesleycabral.com

Sean O'Leary - Graphic Designer -- He created a kick ass poster for FUNNY -- and consulted with me on the script through the process. Based in Minneapolis, Sean is a force to reckon with.

With a revolution in Cairo occurring right now and the Middle East at the heart of such charge, FUNNY an excellent way to digest, process, and invite humor to parts of ourselves that we have always considered foreign or those we know of that never belonged. You have 6 shots to see this show. 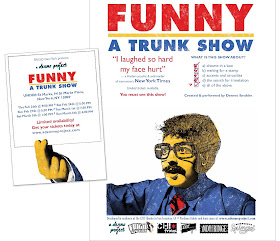