My mom was a jack of all trade, dancer, writer, teacher and my father was a musician. My mom made sure to expose me to as much culture and options as possible. I first started out as a dancer, and then found my way into theatre. I really started becoming serious about theatre around the age of 15, and I directed my first student piece at 16. I haven’t stopped creating some sort of theatre since then.

So many people, I try really hard to surround myself with creative people in my everyday life. I’m really fortunate to be a part of an amazing ensemble of artists in Rising Sun Performance Company and a part of the Off-Off-Broadway community at large. I’m inspired by my collaborators on this project and my surroundings of New York City. I try to soak it all in Music, Dance, Theatre, Art, New York City culture, the list goes on and on. I think as a director you really need to know be a potpourri of styles, influences. Open to anything that comes your way. 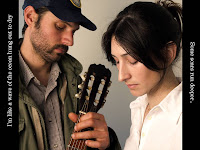 Goodnight Lovin’ Trail is a subtle and touching drama that takes place at a truck stop diner in West Texas, where two desperate and lonely strangers find redemption in each other's eyes while discussing a stolen guitar. The play explores raw human emotions and consequences while these two desperate characters navigate and come to terms with the choices they've made on the road of life.

What led you to direct it?

Our 2004 production was originally directed by another company member, but she moved out of state, and we needed someone to direct our subsequent remount in 2009. Because of my long time relationship with Nic Mevoli and John Patrick Bray, I decided I wanted to take over directing so that I could work with the both of them again.

I have a brilliant stage manager who is doing double duty as an understudy - Lindsay Beecher, she is an ensemble member of Rising Sun and our company’s production manager. She's been with the company since 2009.

So many things! We are an ensemble company in residence at Horse Trade Theater Group on the Lower East Side. This is our 10th anniversary season and we have some really exciting things planned! February 28th we are having an Oscars Viewing Party/Fundraiser, March through May we are having
FREE monthly One-Act Readings that solicit audience feedback and help us select works for full production in July. June 22nd is our 10th Anniversary Party and Mash Up performance featuring a selection of works from our past seasons. July we are having our 5th Annual One-Act Performance Series, and we are have two long term mainstage productions that are so exciting I can’t talk about them yet! Whew, as you can see, a whole lot is coming up for us!

First off, please support Off-Off Broadway! We aren’t just hobbyists, but artists taking risks, working hard and making really great theatre! Please come out and see Goodnight Lovin’ Trail! We would love to meet you in person and hear what you think of the show!