The B-Side: "Negro Folklore From Texas State Prisons," A Record Album Interpretation - Where messages can be found between the lines

People of a certain age may recall the joy of going through dusty bins of vinyl recordings at a record store or flea market and seeing one that unexpectedly caught their eye. Said discovery opening a window to a world the finder never new existed and which was now long forgotten by all but a precious few. Such is the effect one has after attending "The B-Side: Negro Folklore From  State Prisons,” A Record Album Interpretation. The show being the brainchild of actor Eric Berryman and presented by The Wooster Group at ’s Warehouse.

Berryman came across "The B-Side”, which was released in 1965, while searching the virtual offering found on Amazon. Intrigued by this particular album, and after undertaking some appropriate due diligence, he began working with The Wooster Group to create an interpretive work that wonderfully succeeds in enfolding the audience into the music and feeling of said material. More than simply playing the various tracks, or “bands” as they are referred to here, Berryman adds just enough narrative to make those who have little or no knowledge of this type of music, or the circumstances under which they were recorded, to be able to understand exactly what the words presented mean. The songs painting a picture that is quiet, melodic and not very pretty. 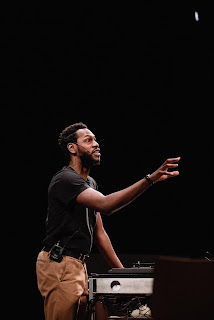 Popular culture has long had a tendency to romanticize certain situations, especially where music is involved. The work these prisoners were given, doing manual labor on what were basically chain gangs - with tasks ranging from logging to picking cotton and cutting sugar cane - were anything but. While these men often sang to keep their spirits up or to remind themselves they still had their faith - as evidenced by the song "Just Like A Tree Planted By The Water" - many of the others contain bitter warnings, grim reminders and instructions for survival. One such example of this being "Rattler". On the surface a song about a dog employed by the prison guards; but in reality, a mournful dirge about escaping prisoners the dog is trained to catch until they can be brought back, or killed. There's also "If You See My Mother”, a song seemingly about prisoners working together in the fields cutting grass, but actually a warning to every man so engaged not to fall behind the rest. For if they did, they might be whipped by the guards who saw them as not doing their share of the work.

Adding to the flavor of the songs and also making the music more three-dimensional, as it were, are the efforts of Berryman, Jason McGruder and Philip Moore as they sing the songs aloud; accompanied by the music and vocals from the record itself. This method allowing the company to further bring those songs to life while helping those in attendance understand just what kind of a world the prisoners were living in when these tracks - some sung, some consisting of spoken words - were originally recorded.

Berryman in particular does an excellent job with the material. He becoming a virtual chameleon when it comes to accents and expressions as he helps bring forth the different moods, speech patterns and dialects from the recording. Most importantly, he lets the songs themselves take center stage. He providing only a brief overall introduction to the work at the beginning, as well as some quick descriptions before the different pieces begin. 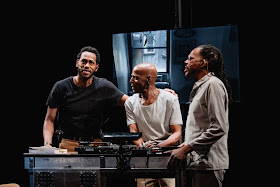 The only major problem is that it’s sometimes hard to clearly hear all of the song lyrics when the record is being played, and thus fully comprehend their meaning. In his intro, Berryman mentions the difficulties he himself had when first listening to the album. He using folklorist Bruce Jackson 's book “Wake Up Dead Man: Hard Labor and Southern Blues” to help him better appreciate exactly what the album contained. also being the person who recorded these various songs in 1964. However, it would have been nice to translate this same clarity to the audience via a glossary of some sort in the show program, with some simple definitions and explanations.

Kate Valk’s direction works fine, the show and songs nicely segueing from one track to the next. Though the last few bands are presented without any narration; the use of which would have been helpful to make thing just a bit more complete and well-rounded.

The term “B-Side” usually refers to a song not as important as the tune most people would be buying the record for in the first place; i.e. the so-called “A-Side”. Yet the “B-Sides” of records throughout history have yielded some unexpected musical gems. Such is definitely the case with The Wooster Group’s latest presentation. Sobering, powerful and hitting home, especially in the final number, thanks to a grainy black-and-white video accompanying the music, this B-Side gets an A+ in delivering its message, with a A- in overall presentation.