The true strength of a classical piece of theatre is its ability to be re-imagined without losing those elements which made it special in the first place. Case in point: the rousing production of Rodgers and Hammerstein's ! at ’s Warehouse. Director Daniel Fish, choreographer John Heginbotham and a top-notch cast transforming the 1943 musical into a stripped-down, semi-immersive experience. With a score that, thanks to the very capable hands of orchestrator/arranger Daniel Kluger, remains as sparkling as ever.

Set in the early 20th century, before became a state, the story opens on the farm of Laurey Williams (Rebecca Naomi Jones). A somewhat headstrong girl, who lives there with her Aunt Eller (Mary Testa). Laurey is the object of two very different men’s affections. Curly McClain (Damon Daunno), a good-natured if somewhat irreverent cowhand, who would like to sweep Laurey off her feet and into matrimony; and Jud Fry (Patrick Vaill), a brooding hired hand who lives alone in the smokehouse with only his dark thoughts to keep him company. 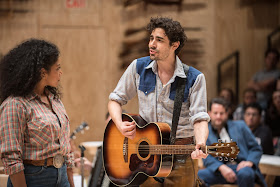 Laurey is clearly attracted to Curly, even though she refuses to give him the time of day. She agrees to go to a box lunch social with Jud basically out of spite towards Curly’s teasing ways, rather than any romantic feelings toward Jud. Jud’s attitude towards Laurey making her very uncomfortable. Especially when his actions call to mind something boarding on obsession.

Meanwhile, a more comic love triangle is also taking place. This one involving Will Parker (James Davis), a likable cowboy, if a little on the dim-witted side; Ado Annie (Ali Stroker), the love of his life; and Ali Hakim (Michael Nathanson), a traveling peddler. Ado Annie loves Will dearly, but has a habit of falling for any man who takes a shine to her, resulting in her current infatuation with Ali, a man quick with the fancy words.

“!” is, first and foremost, a show about everyday people with everyday problems. Albeit with a musical spin and set in a long-gone era. Yet all the issues presented (i.e. falling in love with the wrong person, trying to be good neighbors with others; and paying the price for your indiscretions) are universal themes which work just as well today as when first presented. The various characters coming brilliantly to life, thus allowing the audience to understand the passions which drive them.

This is particularly evident with Jud. While the character's comments hint at a checkered past, one can also see the hatred he's carried for years from being treated as not worthy to associate with decent people. Vaill giving a powerful performance as an angry and tormented man a hair's breath away from lashing out.

Stroker, quite simply, steals the show as Ado Annie. The actress taking what could be, in the wrong hands, a rather cynical woman, and presenting her as a worldly, yet naive soul. Her delivery of “I Cain’t Say No”, a song which could be seen as offensive in some quarters, comes off beautifully here. The character also meshing perfectly with both the down-to-earth Will and the roguish Ali. The latter being someone who, despite his best efforts and fast-talking ways, often ends up the worse for wear due to his own volition. Elsewhere, Testa gives nicely understated portrayal of Aunt Eller; the character offering both an air of stability and, when needed, a large dose of common sense. 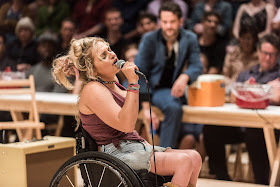 Jones and Daunno are very good as Laurey and Curly. Both characters coming off as appealing but never overbearing, with a very strong chemistry together. Curly’s use of a guitar, and Laurey's acknowledgement of same, being one of the few tweaks the company has made to the libretto, but one which only serves to add an extra sense of fun to the story. It's also the precursor for a peak into the subconscious of the characters, via some interesting lighting work by Scott Zielinski. Another good use of lighting, and lack thereof, takes place during a deceptively quiet scene between Curly and Jud.

Also quite good is Laura Jellinek's set. The playing space made to look like a gigantic barn, with colored streamers and lights strung across the ceiling and walls. There are also multiple gun racks on one wall, and a number of large wooden tables on the stage. The direction by Daniel Fish is excellent in making the show engaging for those unfamiliar to it, while at the same time making it feel totally fresh for those who have a greater familiarity with the work.

Although there are no splashy dance numbers here, there's plenty of foot stomping, knee-slapping moments to enjoy. Heginbotham’s choreography, with one exception, being a perfect fit for this production. Especially exuberant are the musical sequences featuring Ado Annie. The only moments that don't always work are in the dream ballet section. While the reinterpretation of the Agnes de Mille concept is interesting, it takes too long to get where its going, with ballet's ultimate meaning not made clear until more than halfway through the sequence.

This production of ! is a very enjoyable experience that's well worth checking out. If that weren’t enough, there's chili and corn bread available during intermission

Rodgers & Hammerstein's !
Music by Richard Rodgers
Book and Lyrics by Oscar Hammerstein II
Based on the play "Green Grow the Lilacs" by Lynn Riggs
Original Choreography by Agnes de Mille