"The Christians" - Whose faith is it anyway?

Preaching the world of God is a great responsibility. For what you say in that respect affects not only how you see yourself, but how you are seen by the very people you hope to reach. It's a point strongly brought home in Lucas Hnath's very powerful and compelling drama The Christians, now playing off-Broadway at Playwrights Horizons. 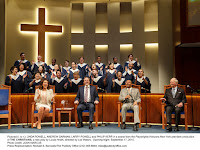 Paul (Andrew Garman) is a well respected pastor who has, over the last twenty years seen his church grow from services in a storefront to a thriving mega-complex. Yet of late his soul is deeply troubled. A story he heard at a religious conference affecting him so deeply, he's announced his intention of taking the church in a new direction. One with the idea that all are saved through Christ, even those who do not believe in him, and which also abandons the concepts of Satan and Hell.

Paul's decision, which he announces during one of his sermons, immediately causes a division in both the church hierarchy and its membership. The first to publicly say that he cannot agree with this new perspective is Associate Pastor Joshua (Larry Powell). Joshua quickly departs his position, and takes about 50 members of the congregation with him.

As time goes on, Paul finds his decision repeatedly questioned. This despite his continual explanations and reasoning, all of which seem perfectly clear to him. (Kind of like Hilary Clinton and her email troubles.) Paul's wife (Linda Powell), for example wants to know why he didn't talk to her first before making his feelings public; while others, such as Jenny (Emily Donahoe), a member of the congregation, wondering why Paul waited until the church celebrated finally being free from years of debt before taking this stand. A debt which was paid in no small part by the church members themselves. Paul's response to this last query being particularly telling. Not that it takes anything away from his belief in what he is doing, but it does serve to point out how in religion, just like in politics, timing can be everything. In the end Paul finds his decision may cost him more than he ever thought possible. 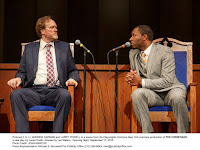 The Christians takes a hard look at the power of faith and what happens when people with differing viewpoints, each of whom firmly believe they are in the right, are unable to accept the other's position. One such confrontation played out with Paul and Joshua via dueling bible verses, though Paul does have the advantage here. He having prepared himself for this situation beforehand. Yet while the playwright has provided a religious framework for the story (and a quite convincing one at that), it could easily be translated to many other situations. Just as it is said the how the Devil can quote the scriptures for his own ends, focusing on specific writings to buttress a certain argument is quite common in all walks of life, regardless of whatever the subject of dispute happens to be. Indeed, many decisions from the U.S. Supreme Court have fallen into this category. The Justices charged with interpreting the law, with many of their decisions turning on the meaning of particular word or phrase or intent thereof.

To his credit, Hnath pulls no punches with his tale, never questioning Paul's convictions, nor the viewpoints of those who disagree with him. The story refreshingly avoiding any stereotypical or cliché-like dialogue, with characters feeling fully three-dimensional and completely real.

Scenic designer Dane Laffrey has done an excellent job here, creating a set which calls to mind a Sunday morning religious television program. Complete with a very enthusiastic 20-person choir. A particularly nice touch were the projected messages about refraining from texting during the program. It's also interesting to note how the atmosphere the show projected took hold even before the play began. Often when people are in a church they involuntary talk in whispers, which was also the case here. The normal pre-show chatter of the audience as they were getting settled being markedly absent.

Garman comes off well as a genial, middle of the road sort of pastor. One whose belief in what he is doing never alters, despite all that happens around him. Kudos must also go to Linda Powell, who basically does nothing for most of the play, other than looking supportive and wincing when Paul mentions the pants suit she was wearing when they first met 22 years earlier. That is, until a pivotal scene where she reveals to her husband her own personal beliefs and just how important they are to her. Also doing a particularly nice job is Philip Kerr as Jay, a church elder and one of those responsible for the financial health of the church. Jay being someone who strives to find a middle ground where everyone can exist. Something that is not always an option when it comes to matters of belief.

As The Christians clearly shows, faith can be a demanding mistress. Especially when it threatens to take away everything you hold dear. For while it may indeed be able to move mountains, it can also point to a path where you find yourself walking completely alone.