One of the best things about going to downtown theatre venues (in this case, Dixon Place) is the opportunity to browse the postcards for upcoming shows and events.

Tonight, a postcard for Isle of Klezbos caught my eye. One, I love klezmer music.  Two, it's a great name for a band.

They have a couple of performances coming up - September 1st at El Sol Brillante community garden, and the one I'm thinking of attending, September 25th at 54 Below.

Here is a little info about the band from their website.

"NYC-based ISLE of KLEZBOS approaches tradition with irreverence and respect. The soulful, fun-loving powerhouse all-women’s klezmer sextet has toured from Vienna to Vancouver since 1998. Band repertoire ranges from rambunctious to entrancing: neo-traditional folk dance, mystical melodies,Yiddish swing & retro tango, late Soviet-era Jewish drinking song, re-grooved standards, and genre-defying originals. ISLE of KLEZBOS concert footage has been broadcast internationally on CBS Sunday Morning, CNN World- Beat, and PBS In The Life, and the band’s live and studio recordings have also been heard on The L Word (Showtime), WFMU, Northeast Public Radio (Live at the Linda), and film soundtracks for Grace Paley: Collected Shorts, Esther Broner: A Weave of Women, and I Guess I’m Not Going to Get toVegas, among others. The band has also been commissioned to create a concert for artist Kiki Smith and studio recordings of Klezbos arrangements for multi-platinum, Grammy-nominated Scissor Sisters." 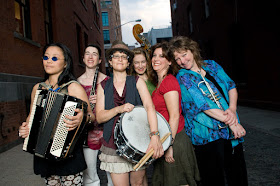 Has anyone checked out Isle of Klezbos?  Let me know what you think of them.
Byrne Harrison at 11:59 PM 1 comment:
Share

Although I have become a regular at this monthly event, it has been a while since I've written about The Astoria Bookshop Storytelling Show hosted by the talented David Lawson.  I attended tonight's show, and as usual, had a great time.

Lawson's show is a great opportunity for local writers and performers to showcase their work, and for those who are particularly good extemporaneous speakers, just to get up and tell a story.  Tonight's show was a jumbled bag of goodies.  The first included a nightmare involving an ex-girlfriend (and an even more fascinating one, briefly mentioned, involving being eaten alive by the Wizard of Oz flying monkeys).  This was followed by a tale of a crime spree used to finance dreams of becoming a public access star.  Celebrities made appearances in stories involving bonding with Harold Ramis over Star Trek: Insurrection, sneaking into a lecture by Stephen Hawking and having a perfect Seinfeld moment with Seinfeld himself.  Sex was included in pieces showcasing awkward matchmaking, awkward three-ways, and awkward (and painful) STD checks.  Other topics included pyrophobia and a fireworks fail, pranking a foul-mouthed aunt, burying a grandmother at Walmart (no, really) or dealing with a mentally ill parent.

The Astoria Bookshop continues to be an amazing community resource, with events for adults and kids and a great selection of books.  Lawson's Storytelling Show is an excellent showcase for the incredibly vibrant theatre and storytelling scene in Astoria.

The next Storytelling Show will be held August 11th from 7:00-8:00 PM at the Astoria Bookshop (31-29 31st Street in Astoria).  There is no theme to the shows; performers can tell a 5 minute story based on something from their life.  There is no fee (but be a mensch and buy a book or two from the shop).  Names are chosen at random from a bowl, and usually most performers are called (but there are no guarantees if it is crowded).

Here are some photos from tonight's show. 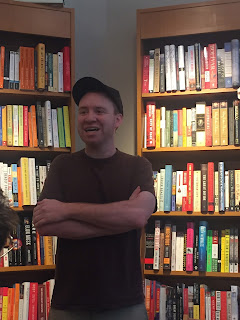 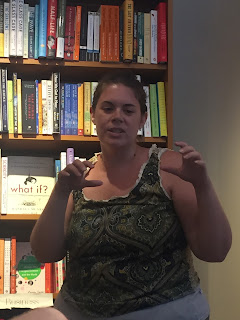 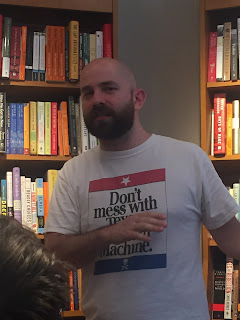 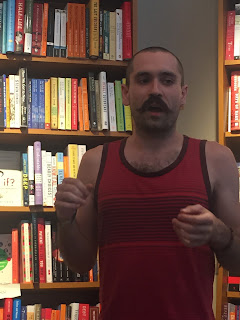 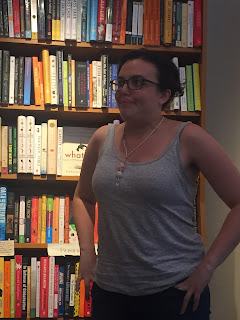 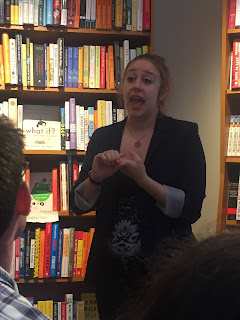 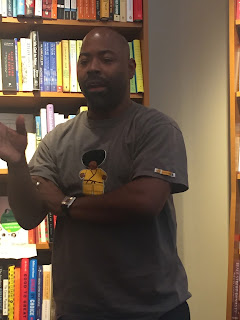 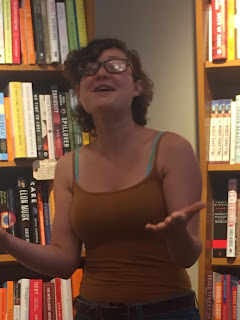 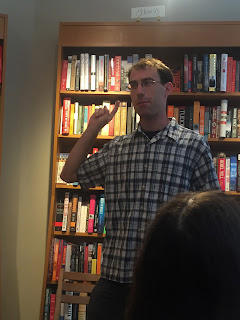 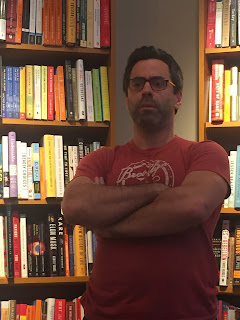 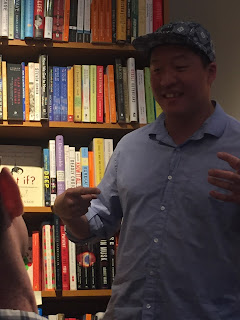 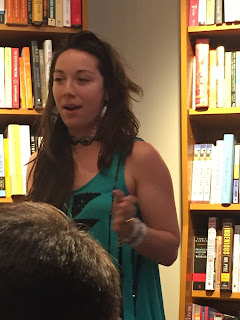 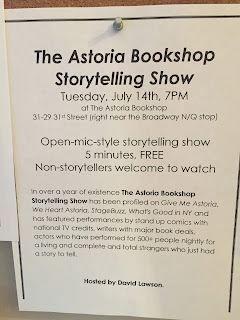 "Dr. Faustus" - One Man Who Went Too Far

Playwright Christopher Marlowe looks at man's quest for ultimate power and knowledge, and the pitfalls that come with it in his work Doctor Faustus. An interesting though not always satisfying production of which is being presented by Classic Stage Company.

Doctor Faustus (Christopher Noth), a renown and respected man of learning, has been uneasy of late. His accomplishments limited by the bounds of human understanding, as well as the restrictions of society when it comes to the expansion of that understanding. Determined to move past these blockades, he disavows such practices as philosophy and religion and turns instead to Satanism, demonology and other forms of the dark arts. Faustus is helped in this endeavor by Valdes (Carmen M. Herlihy) and Cornelius (Geoffrey Owen); two acquaintances already familiar with these subjects.

Quickly taking to these unsavory practices, it's not long before Faustus is able to summon up the demon Mephistopheles (Zach Grenier). A being so horrible in appearance, the first sight of him causes Faustus to fall to the ground in terror. Faustus proceeding to offer up his soul to Mephistopheles' master Lucifer in exchange for unbridled power for the next twenty four years; during which time Mephistopheles will become Faustus' faithful servant. It's a deal quickly accepted with the contract signed in blood.

From that moment on, Faustus' power and influence begins to grow. Alternately feared and revered, he finds himself much in demand for the miracles he can perform. Miracles which include being able to raise the dead - both those long gone and those killed only moments before - and which lead to vast rewards after he accomplishes his tasks.

Yet as time goes on Faustus finds himself growing more and more weary. He finding satisfaction in his power, and contempt towards those for whom he demonstrates it, but never attaining any true personal happiness. Part of this situation coming from a sort of caveat in the contract Faustus signed. A caveat forbidding him from taking part in anything that involves holy rites. A point Mephistopheles explains when denying Faustus' request for a wife. As a result, Faustus must content himself with women of easier virtue, all of which Mephistopheles happy supplies. Faustus also having his pick of ladies from history, such as the beautiful Helen of Tory (Marina Lazzaretto), should he so desire.

The above-mentioned caveat also serving as a sort of warning which runs through the entire story. A warning to "let the buyer beware". Or, to put it another way, if you make a deal with the Devil, don't be surprised if he only lives up the letter of the agreement, rather than its sprit. For while Faustus' quest for power is seemingly fulfilled, his thirst for knowledge is not. Mephistopheles often answering the questions Faustus puts to him with circular replies - especially when it comes to the realties of heaven, hell and what happens once one is dammed. Faustus thus learning only what Lucifer and Mephistopheles decide to tell him, rather than what he actually wants to know.

The play has some very interesting points to make, with certain scenes coming across so powerfully one can hear a pin drop as they play out. Especially when Faustus makes his unholy bargain. Where the show runs into problems however, is in the uneven mix of humor and drama. As Faustus' power increases, his servant Wagner (Walker Jones) decides he needs a servant of his own and recruits the street beggar Robin (Lucas Caleb Rooney) for that purpose. Robin soon after chancing upon one of Faustus' forbidden books and, with his friend Dick (Ken Cheeseman), plans to use the magic contained therein for his own ends. Robin & Dick's scenes, played for laughs and having very little depth, only serve to distract from the central characters and plot of the story. While the idea here may have been to show how power corrupts and how absolute power corrupts absolutely, when the characters involved in such a scenario aren't really that interesting, their presence becomes more annoying than anything else. A good portion of this misfire must fall on director Andrei Belgrader who, along with David Bridel, adapted the Marlowe tale for this production. The two being unable to make the different elements in the story come together as they should. Indeed, at points it almost felt like one was watching two completely different plays.

In a delicious bit of irony, it's Mephistopheles who turns out to be the most honest entity in the piece. The demon making no denials as to who and what he is and talking with great fervor of his and his master's long-ago time in heaven. In contrast, Faustus and his various servants are all trying, by any means necessary, to become something more than they actually are. Also shown briefly are two scholars (Jeffrey Binder, Cheeseman) who quote liberally from what they have read in books, but when presented with something they cannot understand, proceed to bluster, stammer and turn into a pair of fools. They being seemingly helpless to transfer what they've learned into the world around them. Which may be Marlowe's way of saying that book learning isn't everything. Rather, how one applies that learning is far more important.

Noth does a great job as the driven, mostly decisive Faustus, while Grenier makes a perfect foil for him as the deceptively quiet, yet full of rage Mephistopheles. The rest of the cast works well in their various roles, though other than Jones as Walker, none really make a lasting impression.

Nicely atmospheric, with a final scene that's wonderfully executed, there's a lot to like about this production of Doctor Faustus. However as whole, the show fails to live up to its full potential - especially considering the subject matter involved.