This weekend, DreamStreet Theatre Company, which was founded by Karuna and Len Heisler to bring the joy of theatre to special needs performers, will present Midsummer Night's Dreamin' a twist on William Shakespeare's tale of runaway brides, funky fairies and tinkers with talent.  The show will run June 12th and 13th at 7:30 at Symphony Space at Broadway and 95th Street.

DreamStreet is an important creative resource in the special needs community, and its live performances attempt to break down stereotypes so audiences can witness the talent of the performers and not simply see a face of disability.

I spoke with Artistic Director Aubrie Therrien about the company and Midsummer Night's Dreamin'.

First, it's nice to meet you. To start of with, tell me a little bit about yourself.  I know you're the Artistic Director of DreamStreet, but what is your theatrical background?

Nice to meet you as well and thanks for your questions!  I started out similar to many persons in the industry. I wanted to be either an actor or a zoo keeper when I grew up, and somehow, the former was more appealing to me.  I went to college at Longwood University in Virginia, a small liberal arts school with a great theatre department, and studied performance.  Shortly after I worked regionally around the country doing the out-door drama circuits and working with a variety of other theaters including the amazing Lexington Children's Theatre, where I learned so much about organizing a theatre machine for the greater good. I also did repertoire shows with The National Players out of DC, where I continued to nurture my love of the classics.  When my tour was finished, I threw everything I owned in my car and moved to New York City. In New York, I performed off-off Broadway in classic, modern and original works. I also continued working with regional theaters in the metro area. I wore a lot of hats during my performance days and decided I wanted to take more control of my artistic career and my life by going back to school. I recently graduated from NYU with a Master's Degree in Public Health and now, with my work at DreamStreet, I am lucky enough to combine my two passions: Theatre and helping disadvantaged populations.

When did you get involved with DreamStreet?

I got involved with DreamStreet during the summer of 2013.

And how did that come about?

Len Heisler, the co-founder of DreamStreet, reached out to me after his current artistic director announced she was moving on.  Lenny had heard of me from a client/friend of mine who knew of my experience in the theatre world and work with unique populations.  I immediately jumped at the chance to be a part of this inspiring organization.  I had always believed in the power the arts played in encouraging self-confidence and growth in various communities; this was my chance to apply it.

Tell me a little about the Dream Team that runs the company.  Who helps create these productions?

Oh wow, I have to say, I am so lucky to be surrounded by such a passionate and dedicated group of like-minded individuals who make up our Dream Team.  Our Co-Founder, Lenny, and our Co-Producing Director Kendra Heisler, act as such a support for the programming and truly believe in the mission of the company. My Teaching Artists are an absolute integral part of this community as well. Kevin Percival and Samantha Evans came into this company so willingly and enthusiastically that their passion and talent becomes contagious to our cast members.  Miriam Wasmund, our Choreographer, generously donated her time to us from day one to help weave modern movement into our pieces to make them contemporary and classy. Our behind the scenes team, like our amazing PR/Marketing squad, our volunteers and our cast members families have all rallied in some way to make productions that break stereotypes and also entertain broad audiences. Even our cast themselves has stepped up to take on challenges that no one has ever asked of them before; and met them with grace and professionalism.  I know that I ask my staff to wear a zillion hats; which they do, pretty effortlessly. And by doing so, our productions come together as a seamless collaboration between cast members and teaching artists. 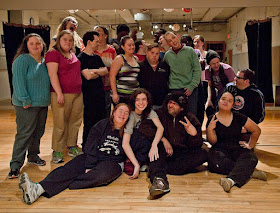 And where do your performers come from?

Our performers come from all walks of life.  Most are from Brooklyn, however, we have a few members that travel to us from New Jersey, Long Island, Queens and Manhattan.  We are proud to have a very diverse cast with different ages, races and genders well represented.  Many of our performers hear about us through the differently-abled community grape-vine as well as through other resources such as advocacy meetings, social media, YAI or HeartShare.

Your next production, Midsummer Night's Dreamin' is next week.  Clearly it's based on the Shakespeare play, but what are you doing to make it your and your cast's own?

Doing a classical piece that has been continually done is a challenge in itself for any organization. For our purposes, we have re-worked an abridged version that approaches the text with a contemporary twist in which each of our members can be individually highlighted. This also enables them to comprehend the story line and subject matter a little more and give a really unique, hilarious performance. I like to say we are doing, "The Muppets Take A Midsummer Night's Dream," because our cast functions very much like the muppets; they love each other tremendously and also have this very silly humor that somehow resonates to many different persons. You can see that in the show.

What can the audience expect from this production?

Definitely humor! And a lot of joy.  These guys are totally inspiring. I expect (and hope to see) people leaving with their mouths hurting from smiling so much. It's just like watching an episode of the Muppet Show. You have a very unique cast of characters who love to be on stage and enjoy bantering with one another. I think the audience should also expect a change of perspective; many people have a certain vision in their head of what they expect when they see a differently-abled cast production. I would say to throw those expectations away. Our cast is completely capable of giving moving, sincere and hilarious performances. And they have done just that. 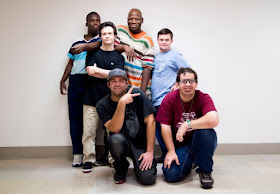 If you could say anything to the people out there who would love to be part of a DreamStreet production but who are afraid, what would it be?

I think it's only natural to be afraid of something that could potentially be a very exciting change in your life.  At DreamStreet, it's about pushing through your fears and growing as a person and as a performer. That is when the magic happens.  We will always, always encourage anyone who works with us in a positive and nurturing way to achieve whatever it is their creative ambitions may be; this goes for teaching artists and cast members alike. Everyone has a dream.

What is coming up next for DreamStreet in 2015?  And are there any long-term plans for the company?

We are really excited to host our first summer workshop series this July at New York City Live Arts.  This is a two-week introduction for all those who want to get to know DreamStreet.  We are working with our performers on improvisation skills, voice and movement, and musical theatre production.  Each week will culminate in a performance for friends, family and care-takers.  We will also be performing our annual musical revue in the December of 2015 and our first DreamStreet Benefit in October.  In the spring, we hope to present an original re-remake of the beloved classic, "Charlotte's Web."

Long-term we hope to open more classes that help enrich the lives of our performers and the differently abled community such as dance, Pilates, yoga, acting, scene study, visual arts and photography classes. We want to be an overall, awesome arts collective! 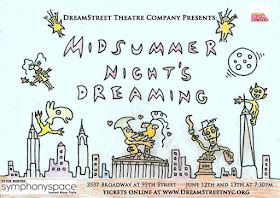