"Loot" - Laughing All the Way to the Grave 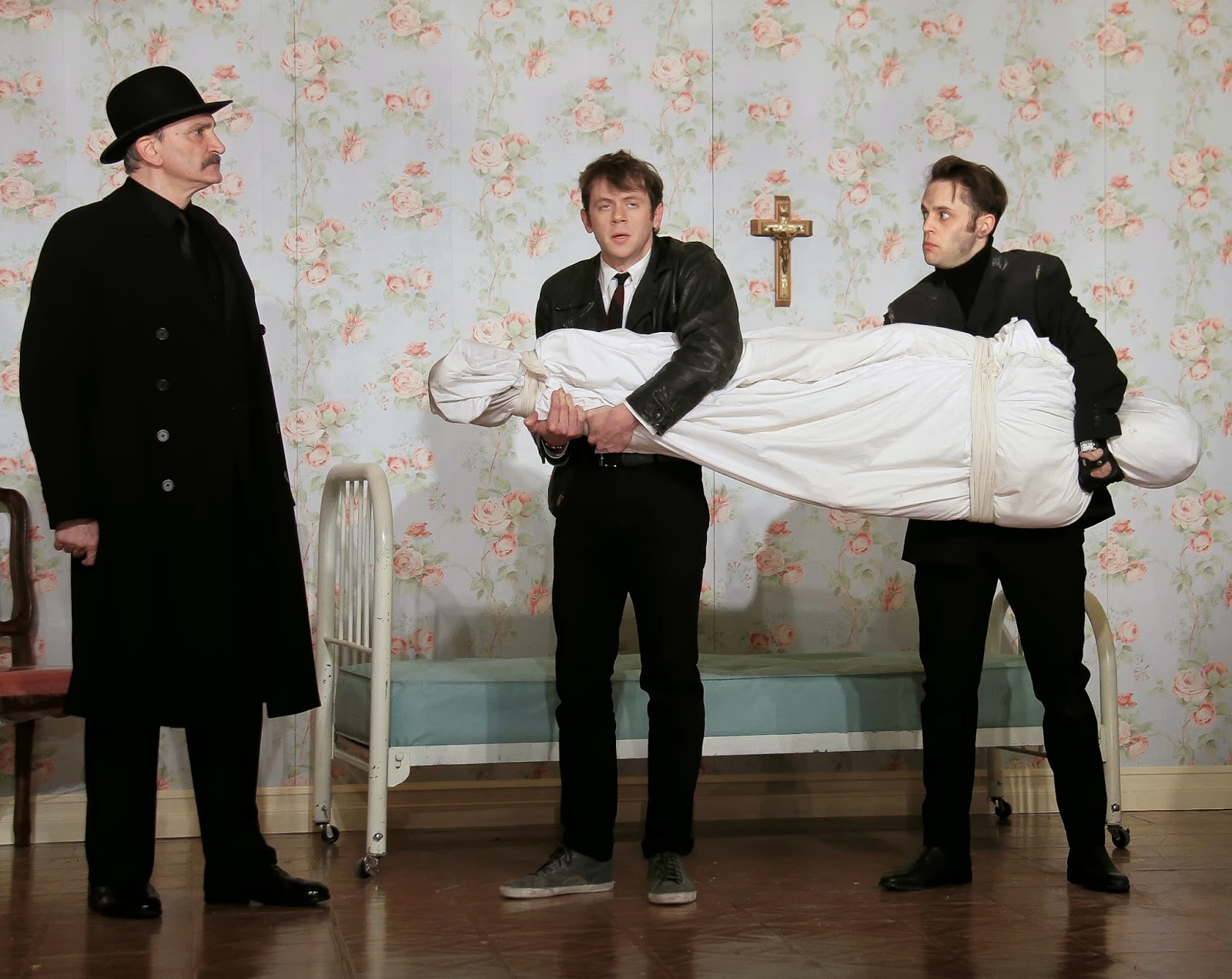 Red Bull Theater Company hits a home run with their presentation of Joe Orton's 1966 farce Loot, an absolutely side-splitting tale of corruption, greed, sex, and potential murder. In 1965 London, grieving Mr. McLeavy (Jarlath Conroy), a god-fearing man is saying his final goodbyes to his late wife, a god-fearing woman who recently passed away. Her body for the moment laid out in a coffin in the family home. Holding vigil with McLeavy is Fay (Rebecca Brooksher), a lovely nurse some years his junior. Also present is McLeavy's son Hal (Nick Westrate), a twenty-something young man who's been in trouble with the law for years but who also is completely unable to lie ("it's against my upbringing") and who keeps a cupboard in the house locked for some mysterious reason. There is also news of a daring robbery where thieves tunneled into a bank from the undertaker's establishment next door. An employee named Dennis (Ryan Garbayo) from that same undertaker establishment being about to arrive to collect Mrs. McLeavy's remains.

It's quickly revealed Dennis and Hal were behind the robbery, the money being stored in the locked cupboard. That is, until they take Mrs. McLeavy out of her coffin, put her in the cupboard and store the money in her former resting place, figuring to use the funeral as a cover to move the ill-gotten gains to a safer location. However doing so may not be that easy. For it turns out Fay, a woman's who's buried at least seven previous husbands, has now has her eyes on Mr. McLeavy and the money his wife has left him. Fay has also been having an affair with Dennis, who wants very much to marry her. There's also the sudden appearance of Mr. Truscott (Rocco Sisto), a rather tall, mysterious and foreboding figure who claims to be from the local water board, but who keeps asking quite a lot of questions at the most inopportune times.

These then are the pieces that make up the delicious satirical soufflé that is Loot. A riff on religion, the generation gap and moral corruption in high places, particularly in the police department. Orton gleefully attacking each of these institutions with razor sharp dialogue, all delivered at breakneck speed. Toss in the almost frenetic energy of the cast and the result is a hysterical vehicle, filled with double and triple takes along with hilarious pregnant pauses which bring the house down more than once.

It also helps that the show has a great amount of physical comedy. I.E. eyes rolling on the floor (literally), bodies being up-ended, and coffins falling apart. As well as the various characters being either tossed about or intimidated, usually by Sisto who takes great delight in quoting that while the police may need warrants and invitations to search a place or interrogate a suspect, the water board has no such restrictions and so he can move about with impunity. The effectiveness of the piece is aided immeasurably by every one of the actors playing their roles perfectly straight, other than the aforementioned double takes, no matter how inane or macabre the situations might otherwise be. Jesse Berger's direction is absolutely flawless here, allowing the actors to take their characters almost over the top as each tries to maintain some semblance of sanity while everything around them is falling to pieces.

Casting is excellent, particularly with Sisto as Truscott - an imposing sort who never takes off his hat, with an air about him which calls to mind one of those film noir detectives from the 1940s. A man determined to solve a mystery and arrest the guilty party, he's also someone who never worries about the little things. Such as regulations or proof, and if he can't find said guilty party, he'll be more than happy to select a patsy instead. Though definitely an exaggeration of what Orton saw as a problem with society at the time, there's no mistaking the playwright's underlying message - one which still echoes powerfully today.

Conroy is great as McLeavy, the only one who really doesn't know what's going on, at least in the beginning. The most honest person in the play, McLeavy's a true believer through and through and who has blind faith in those in power and authority. He even gives a speech about the need to keep the law-abiding safe from danger and if one has to give up one's rights to so, then so be it. Brooksher makes an enjoyable Fay, a black widow type always one step ahead of the authorities, though she may not be so lucky this time. Westrate and Garbayo make a funny pair of anti-establishment sorts who plan the perfect crime but then see it all start come apart with everything from a car crash, a mad afghan hound, and some loose body parts all coming between them and the stolen cash.

Narelle Sissons' set of the McLeavy parlor where the story occurs nicely sets the time and place of the tale with the scenery giving the place a charmingly old-fashioned appearance. Costumes by Sara Jean Tosetti are all nicely tailored, especially the outfits Brooksher, Westrate and Garbayo wear.

Starting slowly, moving to a cataclysm of chaos and decreasing just enough to allow the audience to catch their breath while things move towards a satisfactory conclusion, Loot is a gem of a tale brilliantly brought back to the stage for all to see. Well done!!

Also in the cast is Eric Martin Brown.