J.Stephen Brantley is an actor and playwright whose work has been commissioned by Performance Space 122, Lincoln Center Directors Lab, and East Hamptons’ Guild Hall. His plays Blood Grass, Break, Furbelow, The Jamb, Nevertheless, Shiny Pair Of Complications, and Struck have been performed across the U.S. and in Canada and Ireland. His Eightythree Down, winner of the 2009 Georgia Theatre Conference award, was nominated for six 2012 New York Innovative Theatre Awards and is published by Indie Theatre Now as part of their Best of 2011 collection. Brantley has performed with Big Dance Theatre, CapsLock, Cucaracha, The Directors Company, Horse Trade, Jewish Plays Project, Neo-Political Cowgirls, and Theatre 167, and at venues including 59E59, HERE, Queens Theatre, Metropolitan Playhouse, P.S.122, Soho Rep, Guild Hall, and Provincetown Theater. He received the Micheál MacLiammóir Award for Best Actor at the 2013 International Dublin Gay Theatre Festival and a 2013 NYIT Award nomination for his work in the FRIGID New York production of Kathleen Warnock’s That’s Her Way. J.Stephen is a graduate of NYU’s Experimental Theatre Wing and a 2013 Indie Theatre Now Person of The Year. His latest full-length play, Pirira, was recently produced Off-Broadway by Theatre 167.

Chicken-Fried Ciccone is the true story of my own addiction to heroin and subsequent recovery, with country covers of Madonna songs, naturally. Director David Drake and I have packed a ten-year epic into fifty-five twangy minutes of reinvention, reconnection, and release.

Back when I was at NYU a hundred years ago, I used to joke about doing a cabaret act of acoustic Madonna covers. But I did not yet play guitar, and I certainly didn’t have the story I do now. Then maybe six months ago, Chemda Khalili invited me to talk about my history with addiction and homelessness on her What’s My Name podcast. Like a lot of people, she was surprised to find out I used to shoot dope, and she and her fiancé Lauren insisted the story would make a great one-man-something... At the time, the very idea of doing a solo piece show seemed self-indulgent to me, but then I was laying in bed trying to think of what I might create that would be simple, portable, cheap. What do I do? Well I write, and act… I have this story…and I play acoustic covers of Madonna songs… It sounds like random madness but actually it makes a lot of sense. It’s a story about reinvention, about the intersection of art and spirituality, and Madonna is the one cultural icon that has been around my entire adult life. I was totally wrong about it being simple or cheap, but everything else has been very right.

I’m incredibly blessed to be working with director David Drake. He is a master of the one-man-show, his The Night Larry Kramer Kissed Me has been a big inspiration to me, as it has been for many writer-performers. I still have vivid memories of seeing the iconic billboard for that show not too long after I first moved to New York – and now I know him! And his alter-ego Tawny Heatherton too! We’re working with a terrific stage manager, Abbey Bay, who won the NYIT stage management award last year. Madonna herself could not have a cooler team.

Me, at twenty-two? Young gay guys predisposed to substance abuse? Anyone who needs to reconnect to the better parts of themselves, really. I guess we all walk through darkness to find our light; I’m spilling some really dirty secrets in this show – sex and drugs and all that… Maybe it’s not heroin for you, maybe it’s something else that knocks you off your path but my hope is that the people who see Chicken-Fried Ciccone come for looking for renewal. That’s what it’s about.

My background is in avant-garde and dance-theatre. I don’t get to do much of that stuff anymore but I continue to be inspired by companies like The Wooster Group and Big Dance. I lean toward the Brechtian. And Madonna. Obviously.

There are loads of interesting shows this year but the ones I am most excited about: Charlie Gershman’s Shooting Abe with Ethan Fishbane, No.11’s The Eyes Of Orbach, Ed Malin’s Oscar Tango-Bravo directed by Bricken Sparacino, and I-DJ from my hometown, San Antonio!

Oh boy. I am returning to Neo-Political Cowgirls’ immersive dance-theater piece EVE, which figures into the story of Chicken-Fried Ciccone actually. I’m spending much of the summer up in Maine at Stonington Opera House doing Romeo And Juliet and its sequel – Romeo And Juliet And Zombies, a new play in Elizabethan verse by Melody Bates. I’m collaborating on another multi-writer epic with Theatre 167. I think Hard Sparks is doing an event out east. I’d like to finish a new full-length. And I’m already booking CFC in other places later this year. But you have to see it at Under St. Marks! It was written very specifically for that space and it won’t be the same script in any other venue.

Show you would love to be involved with? I kind of want to be in Peter In The Starcatcher. Anything with pirates really. Wait, is this meant to be specific to the Frigid fest?

Favorite actor? I HAVE TO CHOOSE ONE FAVORITE ACTOR?! No. But I will tell you my current New York actor crushes: Nic Grelli, Diana Oh, Jordan Tierney, Todd Flaherty, Rajesh Bose, Mikaela Feely-Lehman, and Kristen Vaughn.

Best theatre experience? That I saw? National Theatre of Scotland’s Black Watch. That I was in? Oh hell I wouldn’t know how to choose…

Worst theatre experience? I saw a terrible high school production of Cabaret once. The teacher/director also played the Emcee. It was…uncomfortable.

Person you’d most like to thank? David Drake. Maybe Madonna. No, David, David for sure. 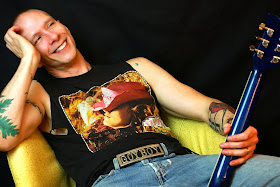