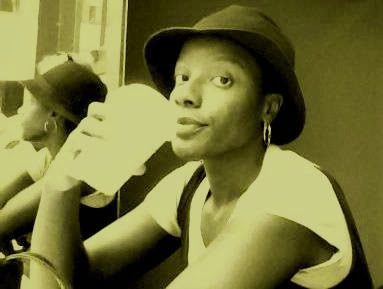 Born and raised in South Carolina, Alycya Miller came to New York via Princeton University, where she studied the work of Katherine Dunham, classical Japanese theater and served as music director for the R&B vocal group, Culturally Yours. After a stint on Wall Street, Miller studied comedy writing at City University London and improvisational theater at the People's Improv Theater in New York. A lifelong hip hop dancer, Miller studied samba and salsa with the Djoniba Dance Center in New York. A classical violist since the age of 9, her string arrangements can be heard in the song “Sweet Danger.” Miller's directing credits include Backstage At Da Fonky B - A Musical, For Colored Girls Who Have Considered Suicide and Top Girls. Acting credits include The Women Of Brewster Place (Theresa) and Macbeth (Lady Macbeth). Miller's comedy writing influences are Jennifer Saunders, John Cleese, Bud Abbott and Norman Lear. Her music influences include Rick James and Deborah Harry.

I wrote this piece, but every time I read it, I find something more literary about it than I consciously intended. I thought I was just writing a goof comedy piece around four original R&B songs I produced back in 2005, but it could actually be used as a study piece for 7th graders. It's a musical comedy about this Abbott and Costello-like pair of girls who work at a hat shop in New Orleans. They've been wanting to get their sexy clown act on a popular TV show called "Live at Da Fonky Burlesk," but the show hasn't had auditions in years. After a series of unfortunate events, the girls finally have a chance to audition for the show. The only problem is that they have to be in Hollywood by tomorrow. They're broke with no cars, so the rest of the show has this song and dance duo doing all kinds of unsavory and illegal things to raise the money. People who like Abbott and Costello, The Monty Python and Absolutely Fabulous will appreciate the comedy. People who like jazz, R&B and nudity-free burlesque will, too.

The idea came to me for a female comedy double act who sang and dance back in 2003 at the real peak of the burlesque revival. I was fronting a funk/R&B band in North Carolina at the time and gradually turned our gigs into a variety show/talent showcase called "Da Fonky Burlesk." We had singers, belly dancers - anybody interesting and talented - all set to "fonky" music. One of the regular performers was very ditzy, always late and frazzled. I called her "Lolli" because she was always lollygagging. My stage name was Brownie Glendale because that was the name of my first pet paired with the name of the first street I lived on. We were so different - she the clown, me the straight band manager - the idea just evolved from there. With my song, dance and comedy writing background, well - the piece just developed from there.

JIM BEAM (the whiskey, not the company, though sponsors are more than welcome).

A bunch of narcoleptics - they'd fall asleep during the acting bits and then we (the cast) could have fun startling them awake when we break out into song and dance numbers. Another benefit is that we could just chat while their sleeping and tell them later that they missed the best show.

Basic Help, East in Red. All of them, though, if I can. There's some real talent in this festival.

Brownie and Lolli Go To Hollywood will continue to run in New York until April/May and then head to DC in July for Capital Fringe. We will find investors somewhere along the way. Fall onward is to be determined, but I have a feeling there's a tall dark stranger in there...

Show you would love to be involved with? Tommy.

Best theatre experience? Fela, the Musical. Bring it back! It was magical.

Worst theatre experience? A production of Ibsen's Wild Ducks that I had to walk out of before intermission. I think the director must have been a sadist to make us all sit through that.

Person you’d most like to thank? My parents, who at 41 years have one of the longest running comedy double acts in America. They call it Their Marriage.

For more information about Brownie and Lolli Go To Hollywood, visit the FRIGID New York website.