Project Shaw Reading of "On the Rocks" Monday, July 22nd at The Players

The next Project Shaw staged reading will be Monday, July 22nd at 7 PM at The Players on Gramercy Park. 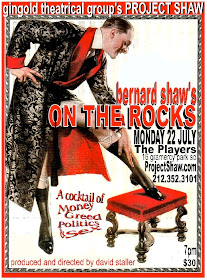 ON THE ROCKS
A Political Comedy
Written by George Bernard Shaw in 1933
A comedy cocktail about money, greed, politics and sex. This viciously witty comedy tackles, head-first, the unthinkable concept of a country in the midst of an economic depression. Unemployment, health care, human rights…you name it. It’s a riotous cast of character, assembled as only possible in the always-surprising imagination of G.B.S.