"You'll Laugh Your Pants Off"

You must be 18 or older to attend this show due to partial nudity, please bring ID.

Featuring:
Naked Boys Improvising
Disarmingly charming and talented, allow this all male comedy tour de force to bare all. Temperatures will rise, clothing will come off, and funny bones will be tickled.

With:
Build An Angel
You loved "Charlie's Angels", but have you met Charlize's Angels? Of course you haven't, because you're going to help us create them. Watch the Angels as they go on a nail biting mission of YOUR choosing. Warning - there may be slow mo hair tossing, so sit in the front row at your own risk.

Superhero Showdown
With the help of our audiences we'll create an original superhero and see his/her birth, life and death unfold before our very eyes on stage.

Del'Arte
Commedia dell'Arte will never be the same again as we explore the life at times of improv guru Del Close, using this ancient "high art" form.

Twitter Black Outs
Short scenes inspired by suggestions from our Twitter Followers. Got an idea for a scenario or scene inspired by the Hot Summer Nights? Contact us @ImprovNewsTeam. You just might win two tickets to our show.

THE DIRECTOR
Scotty Watson is an alumnus of The Second City where he performed for many years and has appeared in various other theater, film and TV productions,  including Cirque du Soleil's Mystere and regular appearances on Late Night with David Letterman. He was recently nominated as one of the 10 best improv teachers in America. His favorite food group is pie. 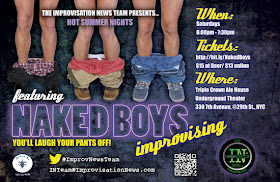