On May 25th, 1787, fifty-five delegates in wigs and tights sat down to create a country from scratch. In 2013, Colin Quinn offers his unique comedic perspective on our national character. From predator drones to the Kardashians, he pulls no punches in asking if this is what the founding fathers planned.

The New Yorker calls Colin Quinn Unconstitutional “Entertaining and a little shocking” while The New York Daily News applauds “Fast, furious and funny! In Quinn we trust.” Time Out New York give the show a critics’ pick and The Hollywood Reporter cheers “Hilarious! Wonderfully riotous.”

After the New York run of the show is completed, Colin Quinn Unconstitutional will embark on a tour in the fall, travelling to the original 13 colonies, in the sprit of the Constitution.

Colin Quinn Unconstitutional marks Colin’s return to the New York stage after his acclaimed Broadway engagement of Long Story Short, for which he was nominated for the Drama Desk Award as well as an Emmy Award for the HBO broadcast of the play.

Tickets can be purchased by visiting www.cherrylanetheatre.org or calling (212) 352-3101. For more information, please visit: www.ColinQuinnUnconstitutional.com. 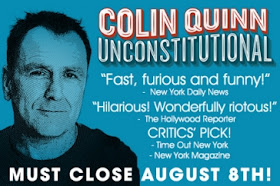