Tom Slot has been active in New York Theater since 2006 as a playwright, actor, director, and producer. He has written multiple full-length plays, one acts, musicals, and educational theater pieces. His last full-length play Killing Time (Planet Connections 2012 Reading Series, produced Summer 2012 at the Payan Theater, NYC) was a finalist in the 2012 Princess Grace Awards. His one act play Reimaging Oedipus was just published in the Freshwater Goes To School anthology. Tom’s pieces are frequently character driven and deal with the misconnections and insecurities that separate us. Tom currently serves as the artistic director of Original Binding Productions, a New York City based production company, and teaches acting at Queens College and Teachers College at Columbia University. He holds an MFA in Acting from Columbia University and is a member of SAG/ AFTRA and the Dramatists Guild.

How did you first get involved in theatre?
I was cast as Oberon in A Midsummer Night’s Dream my sophomore year of high school. It was a wonderful experience and firmly planted the theatre bug in my DNA. Midsummer remains one of my favorite shows to date.

What is your show about?
Burnt-out psychologist Dr. Henley knows crazy, but when he’s confronted by the ghost of a whaling ship captain from 1863, he questions his own sanity. Tasked to balance the cosmic scales, Henley embarks on an insane adventure that could cost him his license to practice, his sanity, and his life.

What inspired you to write it?
A few years ago I was at a middle school concert and one of the choral groups performed "Farewell to Tarwathie." It was the first time I had ever heard the song and it immediately brought to mind the life of a whaler and the danger they faced on the open water. The character of Captain Tom Haskins was born on the spot and I went home and started writing his story. The story grew and swelled from there, but it all started with that song.

I’m blessed with an amazing cast and crew for this show. A lot of the actors are from Original Binding Productions, who I’ve been working with since 2009. Included in the mix is Claire Nusuti (who I can’t seem to write a play without writing a character for her), Tom Edmond Evans (a founding partner in OBP), R. Alex Murray, Sharon Pinney, Matthew Dean Wood, and Maryellen Molfetta. We’ve all done a number of shows together and have built a strong ensemble through the years. This time we’re added a number of talented new actors as well including the wonderful David Stallings (whose physically it a dream to watch), Matt Golden (who brings a wonderful two page monologue to life effortlessly), Rick Apicella, Hannah Dubner, and Larry Phillips. Behind the scenes Victoria Grazioli and London Griffith keep us all sane.

Planet Connections donates a portion of the box office for each show to a charity.  What charity has your production chosen and why?
We are working with the ASPCA, a great organization that gives a voice to animals in need. My dogs have always been an important part of my life and we wanted to recognize the work that the ASPCA.

What's next for you after Planet Connections?
I’m developing a number of new scripts at the moment and will be taking the summer to work on them. In August Original Binding Productions puts up a weekend of one act plays written by female playwrights and focusing on emotionally revealed characters call Naked Theater 2: The Ladies. It runs August 8-11 at the Access Theater Gallery.

If you could work with any famous actor, living or dead, who would it be?

I’d love to work with Bill Murray. He is a gifted comic and dramatic actor who makes even the most broken characters fun to watch. I am always drawn to the flawed character that gets in his own way in my writing. Seeing Bill Murray play one of those characters would be a dream come true. 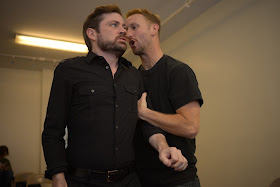