Celestine Rae  is an actress, contemporary dancer, and emerging writer. Born and raised in Philadelphia, Celestine graduated from Temple University with a degree in English. Two weeks after graduation, she moved to New York City to pursue her acting career full time. Celestine studied at the William Esper Studio under Terry Knickerbocker and has appeared in several off Broadway productions as well as independent Film & TV, including a recurring role on the hit HBO series, Boardwalk Empire. ​Her passion for telling stories with complex female characters lends itself to Velvet Rope, a provocative play about a young college women's studies major whose curiosity about the world of stripping leads her to pose as an "experienced" stripper at the local club.
​
As a budding writer and director, Celestine seeks to challenge the perceptions of women and the underrepresented in the media. Her exploration of the world of stripping in Velvet Rope spawns from her desire to investigate beyond the social stereotypes of marginalized groups and bring forth the humanity that exits within them, but is often dismissed. www.celestinerae.com
​
How did you first get involved in theatre?

I began my life in the theatre as a dancer. I was terribly shy as a child and it wasn't until my first dance recital at the age of 4, when the curtains opened and the music began, that I came out of my shell. Being on stage made me feel at home. I grew up performing on stage in concert dance recitals and with dance companies in the Philadelphia area where I grew up. Dance was an enormous part of my life since I was 4 years old. It allowed me to express myself in ways that I could not as the shy child I was off stage. I knew that being in a theatre and performing was my calling. When I found acting, it completed a piece of the puzzle artistically and allowed me to go even deeper through another means of expression. The move towards acting sparked an interest in creating my own work and I began to write plays. Now I am directing a play that I wrote. The theatre and performing are my callings in life. Sometimes I feel that the theatre chose me, rather than the other way around. I find myself always returning to it in some capacity. No matter how many films I work on, there is nothing like stepping on a stage or directing for the stage. Simply nothing like it.

I have so many. I’m still inspired by the old school theatre and dance artists – Alvin Ailey, Carmen De Lavallade, Jeffery Holder. They understood story telling through movement. I think of Ailey’s “Revalations” and the masterpiece of a story that it was without any words. As an actor and director I work from a place of understanding in the body first. I am also inspired by artists who were considered “before their time” and helped to create a new genre or way of approaching art- The names Sidney Portier, Marlon Brando, Eartha Kitt, Dorothy Dandridge, Anna Deavere Smith, Johnny Depp, Denzel Washington, & Phillip Seymour Hoffman come to mind. And I am incredibly fond of the writers- John Patrick Shanley, Lynn Nottage, and Stephen Adly Guirgis.

Joan, a college sophomore, sets out to explore the topic of women’s sexuality for a thesis paper in her women’s studies class by going undercover at the local strip club and stepping into the world of a stripper.

I was inspired to write this play 2 years ago when there were what seemed to be recurring instances of government officials being caught in sex scandals. Every time I watched the reports on the news and saw the way the women involved were being slandered, I cringed. I wondered what were the real stories of these women, separate from the judgement that was being placed on them by the media and the public. And then, the idea about women’s sexuality and the enormous disparity between the way women are perceived when it comes to sex as opposed to that of men, kept coming up for me. So I wanted to write about it.

Velvet Rope is benefitting Women for Women International. Because our play is about women I felt that this charity, that assists in the rehabilitation of women and their families who are survivors of war, was something I connected with and wanted to contribute to.

I hope Velvet Rope will continue on and have the chance to have a full New York City run.

Finally, if you could work with any famous actor, living or dead, who would it be? 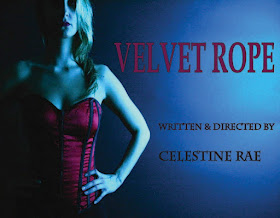