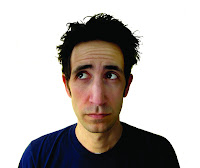 Seth Lepore (Writer/Performer) holds a BA in Interdisciplinary Studies, focus: Creativity in Education from Naropa University in Boulder, CO. Since 1996 he has created several self-produced one-man shows. I am not Fragile: A Confessional (1996); 5 Perspectives on Public High School (1997); Jobs Galore (1998) which was performed in tandem with a one-act play entitled Versus which Lepore wrote and directed. Two Minutes to Midnight (1999) was the last monologue Lepore performed before taking a ten year break to focus on several music collaborations especially his solo project Older Than Hours.

In 2010 he embarked on a parallel trilogy of solo shows about the underbelly of the self-help movement. The first installment, Losing My Religion: Confessions of a New Age Refugee, has been self-produced in black box theaters and fringe festivals throughout the country. The show won an Encore Award at both the Boulder and Minnesota Fringe Festivals as well as being named one of the top ten plays of 2011 by the Twin Cities Daily Planet. The second part of the trilogy, SuperHappyMelancholyexpialidocious premiered in the Spring of 2012. Kicking Ass and Taking Names, the third part of the installment is in development for 2014.

What’s your show about?

A hysterical romp through America's spiritual enterprise exploring the blurry line between self-help and faith.

I was entrenched in the new age/self-help world for over a decade. Even though I was always cynical about the results I finally saw that the dogma was just as rigid as any extreme religious movement so I decided to make a whole trilogy of shows about it. This one is the first in the series.

Who else is involved with the show?

Who is your dream audience for this show?

Anyone who considers themselves a secular Humanist, agnostic, questioner, skeptic and/or recovering fill-in-the-blank is perfect for this show.

Mike Daisey, Spaulding Gray, a bunch of people no one has ever heard about but will sooner or later.

I'm doing a residency of War/Peace in Easthampton, MA. It's a participatory installation which examines our ideologies and belief systems around these two concepts.

Musical or straight play? Neither.

Losing My Religion:Confessions of a New Age Refugee plays at The Red Room on the following dates: