Planet Connections Interview - Diánna Martin of "Coyote On a Fence" 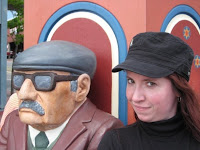 
How did you first get involved in theatre?

This is my third year with Planet Connections, and I always end up being the one doing the interview, so I’m trying to come up with something different! I come from a theatrical family, so I suppose since I was a small child. I did move on and focus on writing for a time, as well as working in Television and Radio, and was working on filmmaking as well (shooting camera, directing, and editing) but I returned to theatre in the early 2000s at the request of my family, who saw that I wasn’t happy with what I was doing. In theatre, I soared. I enjoy other mediums of visual work, but few have the same flame that theatre ignites. It’s a rush better than any other.

My parents (Ann Wedgeworth, Ernie Martin), without a doubt, who between the two of them act, direct, and teach acting (which are all things I do now as well). They are incredible and have shaped my life creatively and are my immediate inspirations. As well, there are so many brilliant – and I use that word sparingly -  actors and directors who have inspired me to go further, by seeing the amazing work they do. To list them would be tedious, so I’ll throw out a few names for theatre: Kate Blanchett, Sam Sheppard, Mike Nichols, William Hurt, Jessica Lange. I am also, especially in regards to this project, very much influenced by the passion of the people around me, who I have created and worked with, in particular an actor/teacher/director/writer David Robinette, who was also a student of my father’s as well. Seeing him go forth and pursue dramatically the things that I wanted to do – gave me inspiration to try and try and try again.

On the surface, Coyote On a Fence is about two men on death row in a Southern Prison and the questions: What is true evil? True innocence or guilt? And questions the death penalty itself – never taking a side, but showing two sides to every coin. One man is a sworn member of the Aryan Nation and committed a horrific crime; the other is an intellectual who works tries to use his publicity as a champion of inmates’ rights with his newspaper to save the lives of those around him. Around them to help tell the tale – and be effected by these men -  are a female corrections officer and a reporter for the New York Times, both of whom have their own issues and needs to be involved.

Underneath the surface, it is about the push and pull of people’s choices coming from the most dire of circumstances; of the desire to be loved, of hate, and basically the mediums that are the most extreme of the human condition. This play is funny, tragic, beautifully well-written, and makes one think and question – I believe, anyway – regardless of what their stance is on capital punishment. I think people will talk about the play for days after seeing it – I know everyone who has read it has.

What inspired you to direct and produce it?

I started this project about four years ago on and off, with my fellow actors/directors in crime, David Robinette and Robert Michaels – the former actually bringing me this play, which I had never seen; never heard of Bruce Graham, and we began work with another actor and it became magical. At one point I was asked to direct as well as act in it, since the character Shawna that I play is mostly in monologue, and as the prison guard is watching the actors on stage – so it kind of works. If we were doing a production I would have to relinquish the directorial reigns (although find someone whose work I trusted – and let go of my ego!!!) so that I could play this character…since Shawna speaks to me in ways on a very personal level. Eventually, due to other projects and David moving to California, we stopped working on it – and I vowed to bring it back.

Although I am an active member in three theatre companies, this past year I finally formed a producing entity, The In-Pulse Group, a producing arm of Martin Acting Studios, for producing readings, and hopefully someday, productions, since I want to focus on revivals for this producing arm. I am blessed in that I am surrounded by many fine actors, playwrights, and directors in my theatrical community, and I enjoy working with them, even if it means just getting a few people together to read a play and go have a beer and talk about it. So Coyote is the first one that I brought, casting it with people I have either directed or acted with before and found their creativity and talent to be rewarding, and their work as actors perfect for the characters. What will be performed in this PCTF staged reading is very simple: music stands and talented actors perfect for the roles reading a brilliant play that I think is one of the most compelling works I’ve read – or worked on -  in the past ten years. This reading is a labor of love for me – make no mistake. It’s also my first theatrical producing effort on my own – so I’ve been learning a lot.

As I mentioned, I originally collaborated with David Robinette (http://www.imdb.com/name/nm1284223/) and Robert Michaels on this play, but now we have Michael Vincent Carrera* (who I directed in a 2010 Fringe Show, “Banshee of Bainbridge” by Jim Tierney), Anthony Crep (with whom I acted in the MTWorks production of “The Oath) and Mark Emerson*(with whom I have acted and have also directed in various readings both for MTWorks and Oberon Theatre ensemble and evening of scenes). Maureen O’Boyle (also a brilliant actress with whom I have acted in “The Oath” and directed in the 2010 production of  Carol Carpenter’s “Good Lonely People” in PCTF, both MTWorks productions) is reading stage directions and introducing the show. Adam Samtur is my Stage Manager and keeper of my sanity.

Planet Connections Theatre Festivity is amazing. The work they do to try to marry art with outreach and the survival of our planet is wonderful. They are doing something incredible – and they’ve been doing it for a few years now, and every year it’s better. Ten years from now other festivals are going to look back on what Glory and the rest of PCTF started and hope that they can be as beneficial to the community. Reminding the community that not only is theatre and performance art important but also making our world a healthier place to live – that’s pretty awesome in my opinion.

I chose CEDARS as the charity, which is the same one that Jim and Rachel Tierney chose last year for our PCTF production of “Carry On”.

For “Coyote”, I think it’s very important because it focuses on saving kids in crisis: neglected children, families torn apart – both after the fact and also in prevention. The character that Mark Emerson plays, Bobby, is definitely a child who could have benefitted from an organization like CEDARS, and I can’t think of a better charity for our show. I also think it’s so important because when you think about it: how many men and women in prison come from broken homes? We need more organizations like CEDARS to help possibly prevent a percentage of those people from ever having to enter those doors.

The In-Pulse Group will be hopefully putting up 6 readings in the next 6 months. I’ve been very fortunate to be sent plays by a few very talented playwrights who are interested in my possibly directing their work. I’m going to spend time reading and also auditioning; I spent most of the last two years directing, and I want to go back to acting more and more – my love for the both of them is extreme.

I’ve also gotten bitten by the writing bug again (I was a writer for many years during my “I don’t want to follow in my parents’ footsteps” years) so…I am trying to write a one-woman show. We shall see what that brings.

And then there is my acting coaching and classes…
If you could work with any famous actor, living or dead, who would it be?

Jimmy Stewart. The intensity and passion he put into his work was spellbinding. I would love to work with him, talk to him about the work (I have a feeling that he and I would be very different in our approach, from articles I’ve read on him) and give him a kiss. Just a little one. J

For more information about Coyote on a Fence, visit http://planetconnections.org/coyote-on-a-fence/. 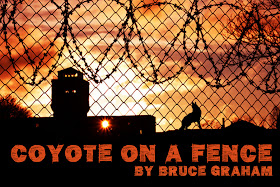