Planet Connections Interview - Craig J. Horsley of "Men Who Let Women Do Too Much" 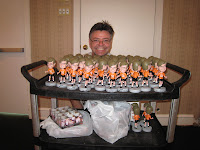 Craig J Horsley has been in the accounting/finance field for over twenty five years. For the past twelve years he has been an independent consultant working with several Fortune 500 companies implementing budgets, preparing financials and monitoring capital projects. He has a BS in Accounting, an MBA in Finance, and RSC Certification as a teacher of English as a Second Language. He is a native New Yorker but has traveled to quite a few far off countries. He lived in Abu Dhabi in the Middle East for seven years where he was the Finance and Admin Manager for a subsidiary of the American oil company, Hess Corp. Living overseas infected him with the travel bug which resulted in his trekking the Inca Trail, exploring Bhutan and climbing Kilimanjaro. When not climbing mountains and sleeping in tents, his favorite location is an aisle seat in a New York City theater.

He is a very strong supporter of the theater; he is a Board member of Abingdon Theater Company, has been a patron of NYMF (NY Musical Theater Festival) for the past three years, and is a member of TRU (Theater Resources Unlimited). He has invested in a number of Broadway plays including the current revivals of “Death of a Salesman” and “How to Succeed in Business,” “Peter and The Starcatcher,” “Lysistrata Jones” and “Catch Me If You Can.”

His first play “Men Who Let Women Do Too Much” will be given a staged reading at the Planet Connections Festivity this June at the Bleecker Street Theater.

I lived in the Middle East in Abu Dhabi for seven years as the Finance Manager of an oil company. I returned to New York and realized that if I plan to stay in NY I am going to do something that you can’t do anywhere else – and that was attend live theater. For the past 15 years I have seen close to 100 shows each year. After seeing some “not so good” theater I decided to try my hand at writing. I wrote two scripts and I submitted this one to Planet Connections. Hope this is better than “not so good.” I always wanted to be involved in TV or theater but I had an incredibly high pitched voice growing up so any thought of being on stage was out of the question. The voice has been fixed but I figured let’s start out writing before I take the plunge on stage.

In life my mother was a very good person; she passed away too young but I feel she is with me always. With regard to my writing style I would have to say Erma Bombeck (does anyone still remember her?); I loved the way she took every day occasions and put humor to them but on those special occasions she could write something that could really tug at your heart. In my pursuit of creative endeavors, I would say the years of watching I Love Lucy made me appreciate humor and the therapy of laughter. Can you believe only three writers would write 39 episodes per season back then? For sheer genius I would say Stephen Sondheim, who I only really discovered fifteen years ago, but I am in awe of his talent.

“Men Who Let Women Do Too Much” is a series of relationship vignettes; various male/female relationships starting from birth (mother/son) through romantic, family and professional situations. The title came to me years ago as I was going through the self - help section in Barnes & Noble and laughed at how many books there were. Originally I was going to write a graphic novel with the title but the play came out quicker and I can’t draw.

I love theater and wanted to be an active part in it. I have been investing in theater for the past 5 years and I have been a Board member of a couple of theater companies. Being an accountant by day I wanted to tap into my creative side (even more creative than accounting).

I wrote this play a few years ago. When I submitted the show to Planet Connections, I had just finished two classes of improvisation at the PIT. It was my first experience of being on stage. When my play was accepted as a reading in the festival, my first thoughts of casting were my improv instructor, Bradford Jordan and one of my fellow students, Tammy McNeil. Fortunately they are both available. I now need to find 3 or 4 more actors before we start running out of time.

I have been a financial contributor to an organization that is involved in micro-financing for women in South America. When I saw that Planet Connections was involved in charity foundations, the coincidence of writing a play about men who let women do too much and my involvement with an organization that has women start businesses to support their families was too much of a sign that I had to get involved. The eco friendly part – well I hate to date myself but – I remember being in 7th grade on the very first Earth Day and walking to school rather than taking the school bus and collecting trash off the street and planting something (don’t know what I planted – I lived in an apartment building); so I guess I have always been concerned with the environment.

I believe in Pro Mujer as most of the money goes to the actual cause. In actuality each dollar is turned over a number of times as these are loans and the women who start the businesses pay back the loans so these funds are lent out multiple times. The interest the women pay funds the admin costs of the organization. Really like this charity.

WOW! I would love to take this show onward. I think it would actually make a great musical. I have no rhythm, unfortunately, and I have been asked not to sing more often than not. I have invited some music composers to the reading so hopefully they will see something in the show and want to collaborate. I want to do the lyrics though.
I have another play that I would like to mount after this experience. It’s a one man show based on one very strange week in my life when I lived in Abu Dhabi and traveled to New York to bid on Joan Crawford’s Oscar.

If you could do one thing to change the world, what would it be?

Open up people’s minds to new thinking and ideas. If I could get people to realize that the world is an “us” rather than a “me vs. you”, I think a lot of the issues we face would be solved. It’s our planet so don’t pollute, don’t waste natural resources. It’s a world economy so if you work and make money, you can buy the things I want to sell. It’s better to have a majority of healthy well fed individuals than many poor and sick living beside a few extremely wealthy and overly medicated. Open minds would take the blinders off of the people who can help.

There are only a few seats left for this reading, to find out more visit: http://planetconnections.org/men-who-let-women-do-too-much/. 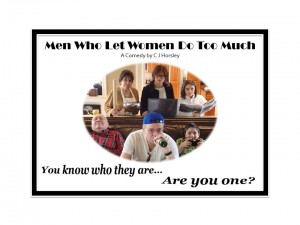