Miriam Kulick and her "Open Hearts" 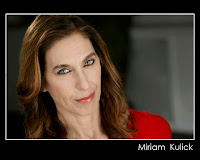 Miriam Kulick, an actor, playwright, director and teacher, first performed "Open Hearts" at the 2011 Washington D.C. Fringe Festival where it was named Pick of The Fringe by DC Theatre Scene. Prior to that she co-founded Miami’s Square Peg Productions whose first production, "Three Angels Dancing on A Needle" received the 2007 New Times Best of Miami award for Best Ensemble Production and for which she was named Best Actress. "Three Angels" was also performed in New York at the Brick Theater. Her solo show "Full Circle" was performed at Ensemble Studio Theatre’s Octoberfest. She has appeared in numerous productions in both Florida and New York City, where she hails from. On television she’s been featured in America’s Most Wanted and in the Doris Wishman Documentary on HBO. She’s a member of Actor’s Equity, SAG and AFTRA.  She can be found at miriamkulick.com.

Miriam, thank you for taking the time to talk about "Open Hearts."  I'll admit I was intrigued when I got the press release.  You seem to be packing a lot of material into this one-woman show.  Could you tell my readers what your Open Hearts is about?

That it's never too late to make positive changes in our life, no matter our age, to let go, as painful as that can be, whether it's saying goodbye to someone or givng up something that does not serve us well.  That once we take the leap to open our hearts, by loving, accepting, and forgiving ourselves and others as well, the foundation is then laid to allow ourselves the courage and fortitude to go forward in life, no matter, the fear or obstacles.

What inspired you to create this show and these characters?

One thing always leads us on to the next and next and so on. A few years back, I tried my hand at directing which also required writing with a group of fellow actors. I discovered my new found passion for writing, which lead to an evening of 6 short plays I wrote for 2 actresses, which lead to my current solo show. Many of my characters are carried over or pieces of former characters that I was not yet ready to put in a drawer and I worked very hard, along with a few dramaturgs, at coming to a streamlined theme. I kind of did it backwards, but although "Open Hearts" is not a pure autobiographical show at all, there is a lot of me or parts of people I know in there, especially the main thrust of loving ourselves and having the courgae to go forward in life no matter what. I wanted to share that, the oepning of our hearts with an audience.

Who else is involved in this production?

I am very fortunate to work with a wonderful dramaturg and director for this run; Gretchen Cryer. I always tell people, if you are of the older generation, she wrote and starred in, "I'm Getting My Act Together And Taking It On The Road", the younger set, John Cryer's real mom of "Two and a Half Men." Either way, they are impressed. I worked with another great director when I did this show last summer in DC, but I knew I wanted to take it to NY and it needed some reshaping and a close friend of mine recommended Gretchen and I am thrilled to work with her. Although I have written it all, she has helped to shape it, to make it a much more cohesive and stronger piece.

I understand you're a native New Yorker, so I imagine you had a lot of theatrical experiences as a kid.  Is there any particular one, either acting or seeing a particular show, that made you decide that theatre was what you wanted to do?

I actually didn't start out studying acting until I was much older. However, as a child I was a natural athlete and always filled with an energetic spirit, (my mom might have used another phrase). As a child, I took a bit of dancing and dramatic art classes, became a modern dancer as an older adult and it segued into acting. You can't fudge dancing, you need to have a solid technique and although that was my first love, I didn't start out training for it, so it was a difficult dream to fulfill. However, I still felt the need to have a creative outlet and acting seemed the next logical step.

In addition to being a working actor and writer, you're also a teacher, running workshops for actors and non-actors alike.  How did you get involved in teaching?  And what is it like working with the non-actors?

I moved to Miami from NY,as my husband was changing careers, and I was working as an actor in Florida, yet I felt limited and wanted to expand what I was doing as well as to make some more money. I reached out to a wonderful teacher who has run or owned his own acting school, where I ended up teaching for him for over 14 years or so. I love teaching, it is another creative outlet for me. My forte whether one is an actor or not, is in freeing up the individual physically, vocally, and most importantly, emotionally. To help them get out of their heads, trust themselves more, and in particular, to push them to take risks, which inevitably leads them to have more confidence and self-esteem. It is very heartening as a teacher to watch people come out of their shell and grow. I do feel more comfortable in pushing actors harder then non-actors, as I can go deeper with them because it is more of a commitment over time, yet it is wonderful to see non-actors open up in general, to get into their bodies and self-expression more.

As my character Sadie would say, Oy! That is a loaded question. I am in my new phase of spreading my own wings. I am married, with one son, who just went off to college, so I am exploring all my options now, and doing my solo show in NY is my first step. My goal actually is to tour this show, preferably in colleges as I can offer master classes and having other theatre venues produce me, and move back to NY to work as an actor.

If you could say one thing to the people who are thinking of coming to see "Open Hearts," what would it be?

As corny as it may sound: come for one hour to hopefully have your heart opened- to realize we can all make positive changes, no matter our age- to allow live theatre to heighten your senses, your heart and your imagination.