Nicole Pandolfo is a writer and actress who lives and works in New York City. Several of her plays have been published and produced throughout New York City and the United States as well as in Sydney, Melbourne, London, Singapore, and Toronto. She is from New Jersey and does not understand anti-Jersey sentiments. She thinks meeting Cher would be the tops. Nicole thanks her mother, Adele, Chris, and her family and friends for their love and support, and would also like to extend a huge thank you to J.Stephen Brantley and Hard Sparks, Jonathan Warman, and everyone at the Frigid Festival! Finally, she would like to thank all of her exes, some nice and some not so nice, for providing the material.

Show: "Love In The Time Of Chlamydia"
Website: http://www.nicolepandolfo.com/


How did you first get involved in theatre?

When I was a kid, maybe 12, a psychic my mom went to told her that I would be an actress, and right then and there I got bit by the bug. (Why couldn’t she have said investment banker?) There’s no theatre in the immediate area where I grew up, which is kind of an economically depressed part of Jersey where arts, especially theater arts, are not going to take any kind of focus in public school, and so there weren’t a lot of options for jumping in. But my mom was really amazing and paid for me to take classes at the Walnut Street Theater in Philadelphia, which I’m sure wasn’t easy for her at the time but it meant the world to me. And I just fell in love. And I took some classes in South Jersey here and there and then once I got to high school I was thrilled because then at least I could be in the school musical. I got my first starring role when I was a junior playing the Wicked Witch of the West in "The Wizard of Oz" - I can still do the crazy loud cackle on the spot.

My biggest life influences are my mom, grandmom, and uncles. I hope that I make them proud and don’t embarrass them too much by writing and performing in shows with words like chlamydia in the title.

Some of my biggest artistic influences are Bob and Jakob Dylan, Bruce Springsteen, Cher, John Leguizamo, Martin McDonagh, Austin Pendleton, Chelsea Handler, the play/movie "Hysterical Blindness," Jimmy Stewart (“he’s very simple- he’s very true”), Rocky Balboa, the TV show "My So-Called Life" (Jordon Catalano had way too much influence on my taste in men), the movie "Pieces of April," and the people from my hometown in Jersey.

It’s about one woman’s search for love in a world full of absent fathers, premature ejaculators, alcohol, and venereal disease. It’s a mostly dark comic take on some of the awkward parts of growing up. But at it’s heart it’s really a story about a girl with no real father figure growing up, having fun, screwing up, (screwing around), drinking a lot, and trying to figure out how to find love in this world.

What inspired you to write and perform it?

This piece started out originally as monologues from the perspective of multiple prostitutes who had seen really weird stuff go down on the job, and it was called “Five Fucked Up Fetishes.” I started writing it one day on the train from NY to NJ. Then I realized I was using a lot of back story from my own real life and then it kind of forced itself onto me as a solo show based on myself. It took me a while to be ok with that, but once I was, it just really flew out of me. I wrote the first draft in under a month just banging out pages and bringing them into a weekly workshop at HB Studio in the village.

In some ways it was like therapy for me. And it’s funny because the therapy angle is in my opinion the best and worst part of solo shows. When done wrong you kinda just think “Yo, call a therapist,” but when it’s done right it’s usually amazing and a big part of what makes solo shows so compelling. And writing this show really helped me to sort out some parts of my life when it came to guys and how I behaved and why I seemed to be going for a certain type of asshole and how in many ways I was also an asshole myself.

And that has always been important for me, to be responsible for my own actions and I wanted that to be a big part of this show and this character.

I met the producer J.Stephen Brantley in the summer of 2009 at the first annual Stony Brook Southampton Writers Conference. We were in a seminar with Craig Lucas and became friendly. We kept in touch and then a play I wrote, "Canadian Tuxedo," made it into the Provincetown Festival in winter 2010, and J.Stephen acted in it. He also helped hook me up with Jonathan Warman to direct it and that was when I first met Jonathan. And so they went on to do that, and J.Stephen and I stayed in touch, and he came to me last winter with the idea of producing this show with his new company HARD SPARKS. He had seen an early draft of LOVE back in fall 2009, and he brought Jonathan on board for it and that’s how we ended up all getting together.

I have a play in Australia right now called "I Thought I Liked Girls" as part of Short+Sweet Sydney. Check it out if you happen to be Australia. It’s also coming out in print soon in the 2011 BEST TEN-MINUTE PLAYS, SMITH & KRAUS.

I’m working on a pilot, a screenplay, and a novel and I hope in the coming months I’ll be touring LOVE.

You can keep up with me at http://www.nicolepandolfo.com/

Thank you for coming and I hope that you enjoy the show. If you liked it please tell your friends to come on down.

I love meeting new people and if you want to swap stories after at the bar just let me know and we’ll go grab a drink! 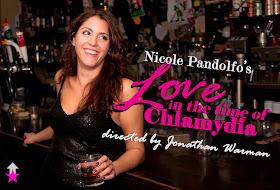