Way back in the 2nd grade I was cast in a reading of a Christmas play written by the school principal. I was hooked. I began looking for scripts at the local library and convincing my friends to give up their recesses to rehearse, then cajoling my teachers into letting us perform in front of the class. I've pretty much been doing the same thing ever since.

Robin Lynn Smith and George Lewis, both from Freehold Theatre in Seattle where I studied. They both gave me the confidence in myself to direct and provided stellar examples on how to do it well.

It's got a little bit of everything - it's funny, it's moving, there's a little bit of a socio-political message regarding views on sex work. There's music and dancing and women in tiny little costumes. Plus, the cast is incredible.

What led to your directing it?

Kate Foster, the playwright, just asked me to. I had directed a reading of a short play of Kate's last year and loved the complexity and humor in her writing, so I said yes. It was also a chance to work with some actors I love.

I had directed Amanda Berry in a staged reading in Spring 2011 and Joe Beaudin in a play for Rising Sun Performance Comany's One-Act Play Festival in Summer 2011, and really enjoyed it. Samantha Cooper is also a Rising Sun member and I hadn't had a chance to work with her on a production, yet, but really wanted to and "Stripper Lesbians" provided the perfect opportunity.

I'm directing "Spring Tides" by Melissa Gawlowski for Boomerang Theatre Company which opens in March, we are working on several projects at Rising Sun including a new play about Henry VIII's wives, a late-night variety show called "Crapshoot," and a group of hotel-themed plays to be presented this fall. I will also be directing "And Ms. Reardon Drinks a Little" by Paul Zindel for Long View Theatre Company in June.

Stripper Lesbians is going to be a hot ticket. Get yours NOW! 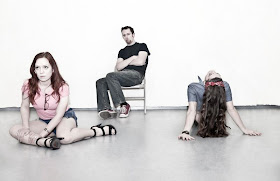